Television's Over - A Last Word on the Adverts 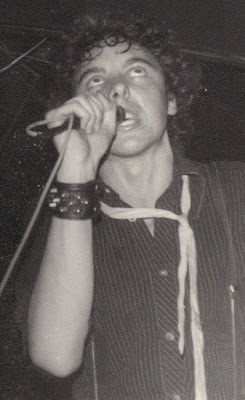 Less than a calendar month after his band, The Adverts, threw in a sweat-stained, gob-flecked towel, the irrepressible Mr Smith was discussing the circumstances of the break-up and imminent plans for a new musical project (from TV's homepage (http://www.tvsmith.com/)

CHEERFUL CHAP, TV Smith. Here we are convened together for the first time in a professional capacity, officially as some sort of obituarising process for his just disbanded Adverts and chuckles are most definitely the order of the day. Bemused Tim Smith, lapping up the ultimate irony. He hands me a type written sheet: 'Welcome girls to this Chelsea Girl store it's the kinda store that tries to give you more of the sorta clothes that make the girls go wow!"

This, it transpires, is the main source of his amusement, a booking the next day as a session singer on a jingle for the Chelsea Girl chain of boutiques. "It's amazing: you go in for a couple of hours, sing it, and you earn a couple of hundred quid It's incredible It's more than I earn in a year. "Also on the jingleurs' pay-roll (of course Tim didn't write it himself) are latter day Adverts keyboardist Tim Cross and one Stoner, former bass man with Doctors Of Madness. These two, plus a 'name' guitarist and drummer (employed elsewhere at present, so therefore subject to at least temporary secrecy) will form the basis of the next TV Smith ensemble. There will be single on RCA, Tim's last commitment to that label under his Adverts deal.

The humour temporarily abated, Tim Smith takes time out to hit back at almost everyone who reviewed the Adverts parting shot, the 'Cast Of Thousands' LP. not least our own Garry Bushell ("He must have a lot of personal problems" and "It must be that double chin" being the few printable comments).

The 'critics' over-reactions aside, though, even a lot of Adverts (or more precisely Tim Smith) supporters weren't exactly heart broken by the group 's final demise, for my part, I'm quite willing to admit to Tim's face that the group's continued existence over the last year or so seems to have been more down to his own loyalty to the people he started out with than anything else. "You bet, " comes the reply. "That's the most important part. I mean, I do it for me mainly, but . . ."

There are advantages in going out with a whimper, Tim opines, "when everyone looks upon you as being really shit. If I'm really successful in the next six months it won't mess me 'up. You form an opinion about all the people that say you're really bad. . . "

Understandable really, this appetite for revenge. But, even granted that the Ads had graduated to every hack's favourite whipping boys in their last few months of existence, he must confess that there were times when they were really bad. "Bad gigs are great!" Smith chuckles. "They're really important!"

On reflection, he adds that he may never do another 'bad gig' again Then, "It must be terrible to be perfect every time. "

A pity, say I, that the band did seem to splutter nut in the end, just a handful of little
gigs and gone. "I'd love to have gone out with a really big farewell tour, " says TV Smith. "It's a pity that RCA really buried the Adverts before they were dead."

You mean they didn't put up any money for tour support? "They never put up any money. Ever. They never liked The Adverts. The guy that signed us was fired about a month later so there was nobody there we could talk to, who knew what we were on about They just figured how could they back a band that may or may not play a good gig or make a record. But that's what it's all about. "
My opinion that the group's pairing with producer Tom Newman was to say the least dodgy is met with another grin'n'chuckle. "I think it's fantastic getting in Mike Oldfield's producer and piano player. It was hilarious. . . "

But maybe not in your best interests? "It depends what my best interests are, " says Tim. with no hint of back pedalling on what's already been said. "If I look back on the last couple of years with The Adverts now I can see it as a two or three year thing. The Adverts were continually standing on the outside and seeing what they could do. Now it's all finished I've got to look at it in a different way, which isn't right. 'Cause while it was still going on everything was perfect as far as I was concerned. It'd be so boring if you just had stages One to Ten and just worked your way through. "

TV's quick to defend his former associates, too. "People were really insulting about Gaye's playing. But on the second album and on the last tour she was playing really well. I mean, to compare it with Jack Bruce would be pointless, but she was right for The Adverts, for what we were doing. " It's unlikely that Gaye herself will be playing again immediately, says Tim. "People were incredibly offensive to her personally Some guy from the NME said she was gross, it's hardly encouraging. "

For his part, Tim Smith says he's going to be a good boy now. "A determined amateur anyway, surrounded by brilliant musicians So probably the next step will be for everyone to say what a shit I am and then I'll leave and the group'll get someone else and everyone'll go 'Cor. what a good band.'
"I just want to write the best possible songs and get them played in the best possible way, " he says seriously He already has more than an albums' worth of new material and is, as they say, itching to go. "I couldn't stop and sit around doing nothing. I don't know what'd happen; I'd go nuts. "

There will never be another Adverts; no reunions promises TV Smith "I could never do that. I'd never reform The Adverts 'cause I'm not like that. It was a first stage, once I'm finished with something, that's it. "

Interview by Giovanni Dadomo.
Posted by Musky03 at 21:24