Outnumbered 600 bored teenagers to one bored non-teenager. I felt pretty lonely in
Redcar on a Sunday night witnessing The Adverts emerge from their 'period of transition'.

A new direction bad been promised, but while the show self -evidently fulfilled the hopes of the Teeside itinerants, it failed to throw any further light on the validity of a band whose credibility has always seemed rather marginal. Frankly, this was just more music to pogo to; you didn't have to be an Adverts aficionado fully conversant with the band's method to realise that nothing much has changed.

Nevertheless (having just left Anchor Records with apparent bad feeling, the company no longer interested in further promoting 'Crossing The Red Sea'), The Adverts manage to market themselves effectively. And even though it's all fairly superficial product, not many people here seemed to care.

I suppose the fact the 'Gary Gilmore's Eyes' - still their best song, tasteless as it is - has been promoted to song number two instead of being hoarded for the encore indicates that The Adverts feel they have something better to offer. If they're right, it's probably In the shape of 'Television's Over' and 'I Surrender'. More melodic numbers than standard Adverts, they have a trace of sophistication, even some jangling Byrds chords, which come as relatively interesting relief from T. V. Smith's intensely monotonous verbal batteries - as heavy on the ears as they are on punk images and catch-phrases. T.V. cools it for this newer material, his delivery tones down while he almost motionlessly caresses the mike like some of the new wave vocalists do across the Atlantic. 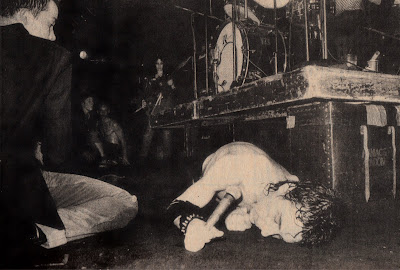 Up against the wall: TV Smith is floored
(Coatham Hall, Redcar 23rd July 1978)

Then it's business as usual as the band resumes its customary vernacular with numbers like
'We Who Wait', 'New Boys' and 'On Wheels'; 'New Church' expressed in rock and roll for
people who just want to hang loose and replenish their beer supply is straight pretentious liberal fascism. I mean, could you/would you pogo to religious propaganda?

Personnel-wise, The Adverts only have one tangible asset and that’s Gaye Advert. She can’t play to any great extent but at least she looks like she knows it . Guitarist Howard Pickup still ludicrously looks like an academic even though he’s opted for scantier clothing, while T.V., stripping down from something like a safari jacket to an off the shoulder shredded black T-shirt (you’d have thought he’d be one of the first to know better), looks more like Johnny Weismuller than a punk. Moreover, the stage was here a little too vast for him: excelling when he’s cramped, the Coatham Bowl’s commodious dias offered his act none of the required physical constraints.

The band closed the set with ‘Bored Teenagers’, ‘No Time to be 21’ and ‘One Chord Wonders’, and by that time one wondered how many more ‘vogue’ clichés this team is capable of trotting out. If The Adverts really do have musical ambition/aspirations , these are numbers that will have to go. Smith’s over-anxiety to make statements, some of them expedient) like manufacturing anthems for younger kids), others blatantly naive, isn’t the kind of policy to take this band into the future.

Not so much a rock n roll concert as an ecological offence, one left wondering exactly how many votaries had shown up strictly for Gaye.

Email ThisBlogThis!Share to TwitterShare to FacebookShare to Pinterest
Labels: 1978, The Adverts