Subliminal Advertising – The Wonder of The Adverts 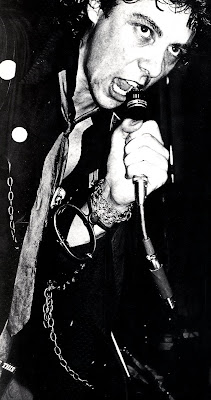 In 1976 a young couple left Devon for the more obvious, youthful attractions of London. Attendees of the infamous (….’no Sid don’t!’) 100 Club Punk Festival in September of that year, Tim (T.V.) Smith and Gaye Black (a.k.a. Gaye Advert) wasted no time in putting their own band together in a similar vein to the other new bands that were starting to make a big noise in the capital. This was perhaps easier for Tim than for others in the same boat, as he had previous experience in his band, Sleaze, which had some moderate success in the South West of England the previous year.

Despite the fact members of the band that were soon to be known as The Adverts (namely Tim himself and guitarist Howard Pickup) had previous with bands, the new group would freely admit that they were in no way masters of their chosen instruments at this point. This fact was indeed acknowledged in one of my all-time favourite advertising hooks in music, courtesy of Stiff Records. Posters advertising joint gigs with then label mates The Damned boldly proclaimed that ‘The Damned can Play 3 Chords, The Adverts can Play 1…… see All 4 at……..’. Genius, and not so far from the truth, at that point. Things were to change though.

Under these circumstances it was a happy coincidence that the birth of the band corresponded roughly to the opening of punk’s own club in Covent Garden, The famed Roxy Club. Punters attending this club were interested in the amphetamine fueled urgency of the music that bounced off the basement walls rather than any manner of musical virtuosity. Whilst other small venues in the city would host bands that were eventually to be labeled punk and new wave, most notably pubs owned by the Fullers and Chiswick breweries, their landlord bookers had to consider the opinions of older punters to the extent that the ‘pub rock’ bands were someway further along the competency road. The Roxy had no such constraints and bands learned on the job, or rather on the stage, in front of young audiences who were not out looking for the ‘lost chord’ when three would do quite nicely!

The Adverts I believe played at The Roxy Club twelve times between January and April 1977 (that’s a lot, certainly in today’s terms!). They supported many of their contemporaries, Generation X, The Jam, Wayne Country and the Electric Chairs and of course The Damned. Under these circumstances they quickly improved and gained record company interest.

Stiff Records, to my mind a brilliant, forward thinking label, made a stupid mistake, in that for the band’s all important debut release they featured only a portrait image of bass player Gaye…. who was to the Roxy what Debbie Harry was to CBGBs and Stiff sadly took a similar marketing approach. This was not what The Adverts were all about and they left the label after that first release.

The Damned started to get some success and took The Adverts on tour with them in the late Spring of ‘77, thereby exposing the band of larger audiences in bigger venues. 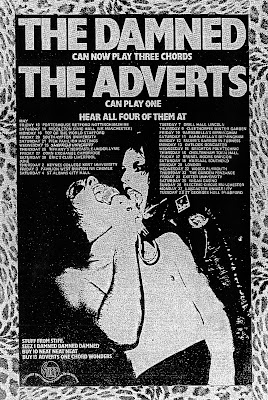 Having shrugged off Stiff, the band signed to Anchor Records with whom they released a handful of single’s, the first on the label being their best known for good reason, the ever sinister ‘Gary Gilmore’s Eyes’….. a brilliant pearl from the mind of Mr Smith on a contemporary request by death row resident, the aforementioned Gilmore that after his imminent execution by firing squad in January 1977 his eyes would be donated to science…. listen to the song and it will all make twisted sense! ‘No Time to be 21’ and ‘Safety in Numbers’ followed before the debut album, the brilliant ‘Crossing The Red Sea With The Adverts’ finally saw the light of day in January 1978.

Right the way throughout this time the band were faced with torrents of criticism, most of it directed at Gaye, tearing apart her playing style in what seems to be such an unfair manner. Let’s face it, those darlings of the NME The Clash had Paul Simenon on bass and he had fret markers on his bass….. by all accounts much of the Clash’s bass on vinyl was provided by The Blockheads' Norman Watt-Roy…. So let’s not be hasty lads. This too was, as I explain to my own children (18 and 21) in different times and dodgy sexual politics were not confined to prime time Saturday night TV, it lurked in the column inches of the music press right beside articles about The Slits, Poly Styrene and Siouxsie who we now look upon as women who empowered their generation and that which followed!

It seems that few people were seriously listening to The Adverts at the time. The hacks were obsessed with The Clash, Pistols and Buzzcocks, but in my preparatory trawl through 100 or so old copies of NME, Sounds and Melody Maker…. very little print space is given over to The Adverts.

This inertia that set in effectively destroyed the band. A couple of single releases in the 18 month gap between the release of ‘The Red Sea’ album and ‘Cast of Thousands’ in late 1979 did the trick. For some reason the second album was ill-received, despite a change in musical direction (i.e. in acknowledgement that punk had evolved, the musicians were more accomplished and had more to say). For certain, The Stranglers and Buzzcocks achieved this transition in 1979, but for some reason the press would not tolerate such a progression from Tim and Co. Personnel changes were inevitable and the band threw in the towel after a gig in Slough at the end of October 1979.

You would have to ask Tim or Gaye for the reasons that The Adverts did not meet their full potential but some of the reasons do not require over-consideration. Gaye was a woman learning her instrument, she was good looking but shied away from the spotlights on stage... something that the music press felt very comfortable digging at in 1977. The fact that there was such long gap between the release of the first and second album amounted to near commercial suicide in 1978.... the music scene was moving faster than it had ever done and such a hiatus could only ever damage a band like The Adverts. 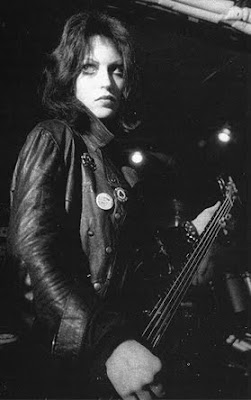 For me in the final analysis, when it comes to The Adverts, musical virtuosity was always second to TV's lyrics... they were an ideas band.... prompting people to think about possibilities as much as anything else. They were truly originals of the first wave!

Personally, I think that ‘Cast of Thousands’ is a great album….. Parsons and Burchill….. ‘Hang Me High!.

Email ThisBlogThis!Share to TwitterShare to FacebookShare to Pinterest
Labels: The Adverts