The Adverts Are No More! 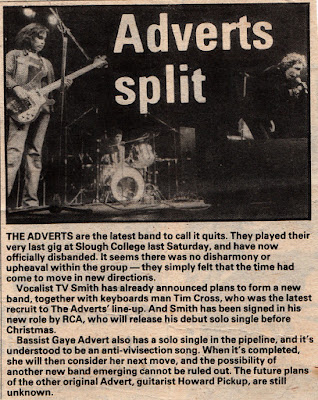 The band called it a day, splitting after a final gig at Slough College on Saturday 27th October. To the best of my knowledge, Gaye's plans to release an anti-vivisection single came to nothing, whilst TV headed towards frontiers new with his new band The Explorers.

For those site visitors who have diligently ploughed through this string of posts it will be abundantly clear that The Adverts were never really beloved of the established music press. It always seemed to me that their (i.e. The Adverts) rather negative outlook (just look at the prevalence on terms suggesting that they 'didn't care') kind of back fired..... and moreover was very much at odds with a band who were passionate about what they did.

No doubt a gap of 18 months or so between their two studio albums was something of a disaster when operating in a particular corner of the music industry that was moving at a million miles an hour.

And yet..... and yet, looking back on their material now it is clear that Tim and Co. really did have something to say. 'Crossing The Red Sea' is now viewed as a classic album of the punk era, and rightly so.

I first saw Tim with his then band Cheap at the Angler's Retreat in West Drayton in 1989. As I recall the 'Red Sea' album had received it's first reissue on Link Records. I did not have the original album but was reluctant to by this version as I was unsure about the politics of some of the bands on the Link label. Cornering, Tim in the Gents, I explained my predicament to him and asked if he would record the album for me. He harrumphed a bit..... complaining that to do so would mean that he would have to listen to it again, but to give his dues he did record it for me (along with a recent Cheap Peel Session!). So what a long way he has come with this material.... it is brilliant that the now 63 year old performer is now reconciled with the songs that he penned in his 20's.

Email ThisBlogThis!Share to TwitterShare to FacebookShare to Pinterest
Labels: 1979, The Adverts