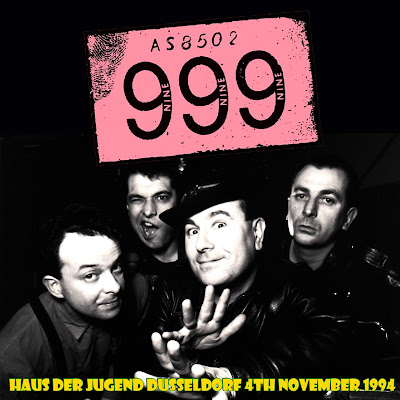 I have been looking for a 999 recording from the mid '90's for some time now and thanks to a friend in Germany I now have one. So what's the thing about 999 in the mid-90's then you may ask. Well, amongst other things I had stopped following The Stranglers at that point as patience had been stretched too far. 999 were on the doorstep and filled that Stranglers-shaped hole! But it wasn't just that, 1994 saw the release of their first new material since 1985's 'Face to Face' album. The new offering 'You Us It' was a return to the rawer sound of the first '999' album and far more aligned with their live set.

At the time, the band were playing regular sets at The Swan pub in Fulham (apparently Pablo's local) and some great nights were to be had down there. This excellent recording from Dusseldorf's Haus Der Jugend features no less that five tracks from the new album.

Email ThisBlogThis!Share to TwitterShare to FacebookShare to Pinterest
Labels: 1994, 999