TV Smith - Over and Out 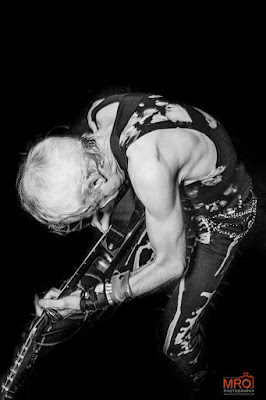 So there you have it. In a dozen posts or so, a contemporary look at the early career of TV Smith.... and what a rocky road it proved to be! I find it very hard to accept that a band who willingly acknowledged their own musical limitations ('One Chord Wonders' anyone?) and stressed the irrelevance of musical virtuosity in numerous interviews managed to get slated on such a regular basis for not being masters of their own instruments. Between side swipes at the band's playing and '70's era comments about the sultriness/sullenness (depending upon the personal preference of the male journalist) of Gaye, the real stand out element of The Adverts canon, i.e. Tim's lyrical contribution was largely overlooked.

It is without doubt that the 18 month interval between the release of the two studio albums did the band untold harm. If anything remained of the '60's in music it was the expectation of a prolific output.... unless you went by the name of Emerson, Lake and Palmer or Yes, a work rate of one and perhaps even two albums per year was not unusual even into the mid-seventies. For a band struggling contract-wise to get backing for a second album there was no worse time than 1978/1979, arguably the greatest 24 months in British musical history. Such was the quality of material in this period that a music fan had so much to latch on to that any band lagging behind, without product out there was easily and quickly forgotten.

That 'Cast of Thousands' was so poorly received is also something of a mystery to me. By the time that it hit the high street record racks, punk of the type that  'Crossing the Red Sea' represented  had imploded and/or exploded into a myriad of styles.... post-punk, two tone, electronica, power pop, Oi!..... In their musical diversity they shared one common musical thread that ran back to 1976 and the first wave of punk rock. So why did the 'Cast of Thousands' fall foul with the critics as it did..... it had keyboards (a studio pre-requisite in 1979) as did Buzzcocks, The Stranglers (OK they always had 'em) and even The Damned! What did the hacks want... 'Crossing The Red Sea... in the opposite direction')? Interestingly, at some point in the 2000's, in Mojo magazine I think that it was, 'Cast of Thousands' featured in it's regular 'lost treasures' feature..... how tastes can change with time!

And so The Adverts went off air, only for Tim to re-emerge just six months later, like a spindly phoenix rising from the ashes, with his new outfit, The Explorers. Moving on in the direction in which The Adverts would have continued had they not split. It may well indeed be the case that in subsequent releases The Explorers failed to fulfill the promise that the debut 'Tomahawk Cruise' offered, but they were good, both on record and on stage, as the Paisley and London recordings testify.

After a brief solo stint that delivered the 'Channel 5' album, which as an aside is infinitely superior to the actual UK 'Channel 5' that routinely pumps untold dross into British homes! TV was ready for yet another crack of the whip. However, wouldn't ya just know it... history was abut to repeat itself and this time with added interest.

TV Smith's Cheap formed in the '90's side of the mid '80's. Once again they were a tight and solid band of very able musicians, driven by good tunes that carried Tim's biting lyrics admirably. So what went wrong? From my experience of seeing them at this time, be it at The Devonshire Arms in Camden or The Bull and Gate in Kentish Town, early signs were always promising with a respectable turn out early doors in the back room of the pub. The support band would go on to play and folk leapt about as they do. Support act would duly finish, pack up their gear and make an exit from the venue.....taking the majority of the audience with them! Only a handful of punters ever remained, and one of them was preoccupied with flogging fanzines! I guess if Tim had stretched the set to include a couple of Adverts' songs, things could have panned out differently... but this was the '80's/early '90's and punk nostalgia was a no no! It was not for many years that he could embrace and celebrate the past. 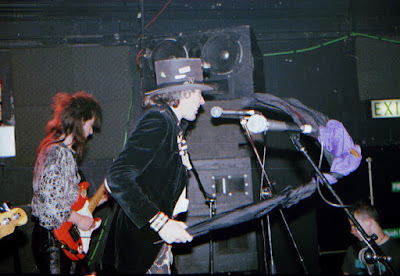 Tim has subsequently had a long and successful solo career, but to my mind it is when he performs with a band, be it these days, The Valentines or The Bored Teenagers that the material really has the impact that it deserves.
Posted by Musky03 at 23:16