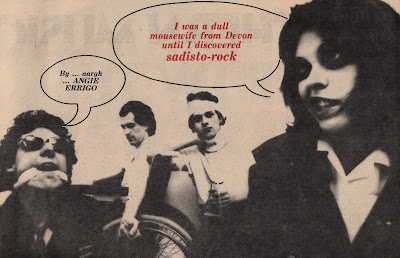 It a bit weird, I must admit, being packed off  to see The Adverts.

I always think these angry young things are going to chew me up in small pieces and spit me back out again, and I suspected I'd be happier at home with my Led Zeppelin records than ligging at the Locarno in Coventry.

Not a bit of it. All quiet pleasant. For one thing, a substantial segment of the audience resembled the natives inhabiting my own dimension of space and time, with a mere handful of would-be punkettes more nearly resembling Dusty Springfield circa 1964 than advertisements for Mrs. Howie or McLaren Enterprises.

For another, the band were so subdued in the dressing room I considered tap-dancing on the table to get them going. Gaye kept leaning out of the loo to direct drummer Laurie Driver's listless doodlings on her bass "From the fifth to the third'! Right." - and retreating back.

TV (Tim) Smith sat hunched and withdrawn for about an hour, meditatively coughing and sipping beer. Unlikely looking manager Michael Dempsey, a publisher friend of NME's Miles (who put him onto the band in the first place and is going to help produce their next single), hopped around bubbling in counterpoint to the band's apparent nervousness.

The first and only previous time I’d seen The Adverts was last winter at the Roxy, about two minutes after they got together. Even then I thought they had something, although I would have been hard pressed to say what exactly.

More recently it seems the fashion in some quarters to be patronizing about The Adverts and sneer that they're terrible when they patently aren't.

Laurie's convinced some of the slagging originated in one well-known punk commentator’s failure to have his evil way with Gaye, which brings me to my biggest realisation of the gig - that Gaye's bass playing is far from the hilarious-joke one has been led to believe, since she's graduated from her initially fearful and delicate finger placement to an adequately ballsy attack.

Now, at least three Adverts articles that have passed under my nose at some point in the last two months have made the identical, hackneyed charge that "Gaye is no Jack Bruce".

Give it a rest, guys. The New Wave has yet to yield any bassist with that calibre of musical education and experience. If people are going to start awarding points on a scale of mature musical artistry now, at least apply the same standards to everyone in the show.

Besides, the statement is about as relevant and  informative as saying Rat Scabies is no Chick Webb or Johnny Rotten  is no Barbra Streisand.

The other face of the media gab has the Sun including Gaye in its recent characteristically intellectual analysis of the "saucy pop" girls and the Daily Express electing her the ethereal, enamel-faced  inheritor of Marianne Faithfull's mantle - everyone's fave wasted English rose.

Playing it straight , Gaye just seems to me to be a very nice girl who is nervous, talkative but hard to follow as she shyly swallows words, averts her eyes and skitters away in pained awareness of photographers.

If she's looking more and more like an only partly reluctant donor to her friendly neighbourhood vampire rather than the girl next door ("I’ve had three pieces of toast today" she protested when I accused  her of not eating) she will still cheerfully reflect that the nicest thing about "Gary Gilmore's Eyes" doing so well is that her parents are pleased.

On stage she looks stronger and cooler, but she's very self-conscious, a situation that's been exacerbated by the kind of press she's excited and the occasional cries of "Get 'em off" that still stick in her craw.

Her way of dealing with it is to keep her head down and maintain a steely fascination with her frets .

"People have the totally wrong attitude to me just 'because I’m a female. People are always going on about what you're wearing and how you present yourself. Some musicians have helped  me, but people in general don't. I'm just desperately trying to get a good sound and play right. I.'m not one of Pan's People. I really like the audience, but I'd almost rather stand behind the stage and play where they can't see me."

Why she does it then is, reasonably enough, because she's got a compulsion to. When she couldn't get a job as a graphic designer after leaving art college, Tim encouraged her to act on the fascination with the bass she says she's had ever since she was a kid, buying Beatles and Monkees records, and more so since she was 13 and discovered Zappa. (although hero numero uno is Iggy Iggy Iggy, whose kisser decorates her clothes, her walls and her bass, the thought of supporting him on his forthcoming tour has her in palpitations).

"I just always listened to the bass. When Tim was working and I was at home all day doing nothing I was getting completely confused.

"Then I was seeing The Stranglers every week and I started trying to play like Jean Jacques." I love it – I was a mouse wife until discovered sadisto rock . .. the effect was shattering.

Gaye is kinder about many of her contemporaries than some of them have been about her. "I wouldn't say any of them are bad at playing. At least they've got guts." . .

And she laughs at her propensity to put herself down in comparison to her enthusiasms for other bands.

"When I told Johnny Rotten the Pistols were my favourite band, he said ‘You’re not supposed to say that!’ You should think you're the best’ I suppose he's right."

Tim says he doesn't care what's said about them. It's all so corny anyway; the same thing always happens to new bands, etc.

However, later, when we replay a tape of their airing on John Peel's programme - an excellent performance with the band sounding really confident - he looks up, genuinely puzzled and says, "I don't see why people say we can't play. I’m not sure why we're the band that's been chosen to bear the brunt of the accusations of not being able to play."

“It could be because we have a female in the group", guitarist Howard Pick-up interjects.

"I object to these accusations because Tim and I have been in bands before, and even if Laurie and Gaye haven't I think we're now as good as any of them."

That's what they all say, honey. But I’ll testify they got 'em going down the Mecca, and I had a dancey time.

"I think we actually try stuff that's technically much more difficult than most of the stuff that's going around on the New Wave or whatever you call it," Tim was eventually pushed into arguing. "We try strange rhythms in the songs ...

"Very strange," Howard howled." . .. and we don't always succeed," Tim finished , "but I believe in songs because that's what comes into your head when you walk down the street, not the band's noise."

But when you've only had one major single released it's sometimes difficult for an audience to discern whether it's hearing a savage, searing indictment of our time or not.

"It's irrelevant discussing what songs mean. Just like asking our opinion on things is setting us up on a pedestal. I just write songs and I had to play them. "

Why? Just another compulsion, I'm led to believe, and screw looking for answers or rewards .

"I would categorically state that I don't care if I get rich, famous or laid, and I think it's crazy when people shout for you and things.

"As far as I'm concerned I’m just an object to do the songs. 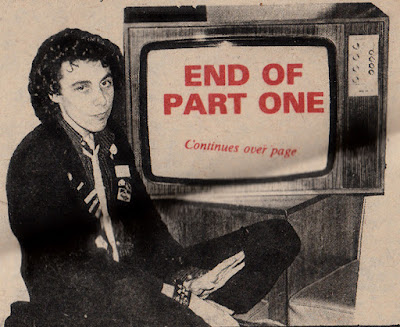 “You have to make sure there are certain lines which are going to stick out, even live, so they can catch you emotionally if not intellectually – just little things that make you swoop up when you hear them.

“It’s like that for me performing. I’ll sing a line here or there and suddenly it gets me up.”

What is this anti-hero stuff? No hopes, no dreams, or aspirations, either financial or physical? No political pretensions?

Is this another New Wave line?

“We’re not New Wave. There are no categories. They ought to cut that now.

“Stop calling in punk or New Wave or anything, so it would just be bands again. Politics is just another cliché. It is part of life, inseparable.”

If there is a – you’ll pardon the pretension – recurring theme in some of Tim’s songs I’d say it was that there is no  point in looking to anyone or anything else to make it for you, as in "New Church” or in the next single, " Safety in Numbers".

"It’s the latest thing to be nowhere/ You can blend into the wallpaper/But you know were always there anyway without the New Wave/What about the New Wave?/Did you think it would change things?"

The cynic in me says this kid is disillusioned.  Allowing, however, that he may be in the purer state of being simply without illusions, what then does he want to do?

“I just like to think that people could come along and have a good time. I think it ought to be a very exciting experience coming to see us. I'd get a buzz out of watching it.

"Unfortunately I'm never in a position where I can watch it."

Gaye had said, “I don 't know what I want to happen. All these business people keep talking about what we're wearing and 'is the follow up commercial?'

"I don't really care if it is commercial if I really like it. It 's nice that we have some say in it and know what's going on, otherwise you end up like Abba in two year's time."

Well , but Abba are rich and popular.

Okay, so The Adverts reckon they don't pine for externals. Tim wears a home, made badge that reads:
"Is yours a LIVING room? Is it a HAVEN, do you feel secure and ... "

Security, like riches and fan letters, being another false god, I presume.

“If everything went right, there would be something wrong."  Tim reasoned . "You have to have tension to keep alive . "