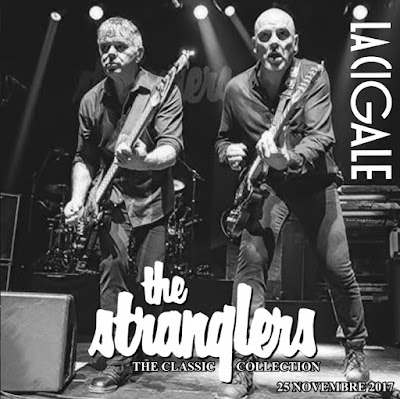 So, here it is, Father Christmas, in the form of Chatts99, brings you this piece of recent history, for indeed it is a piece of history for the band in that it features 'Don't Bring Harry' played outside of an acoustic set. Not only that, Ladies and Gentlemen, it has extracts of the French version of N'Emmenes Pas Harry.... Happy days indeed!

A good time was had by all. See you in March! 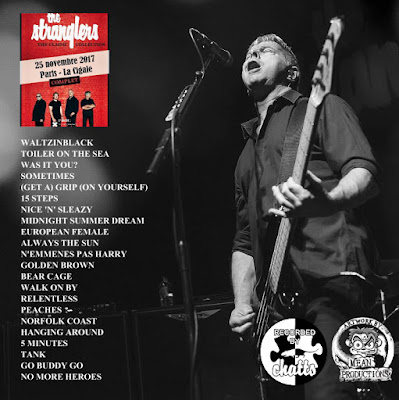 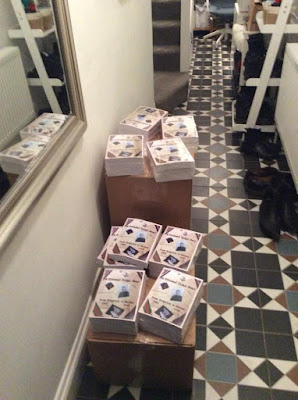 I am pleased to say that my book 'A Pithead Polar Bear - From Brighton to Belsen 1940 to 1946' is back in print in a revised edition.

It was my great pleasure to travel to South Wales last week as guest speaker at the 'Back Tuesday' Club on the subject of the book and the research pathway that lead to its publication. The 30 or so chaps in attendance on the evening were primarily local farmers by trade but with a side interest in military history. The origins of the name 'Back Tuesday' stems from their annual long weekend visits to locations of military interest (Normandy, The Western Front, Waterloo etc)..... 'Back Tuesday would be a parting remark to the family on such occasions.

Little did I know in 2014 when I started the research in earnest that I would be telling my Grandfather's story in such interesting..... not to mention remote locations.

Details on the book can be found here:

http://apitheadpolarbear.blogspot.co.uk/
Posted by Musky03 at 16:59 No comments:

Next Up Australia and New Zealand!

Email ThisBlogThis!Share to TwitterShare to FacebookShare to Pinterest
Labels: The Stranglers 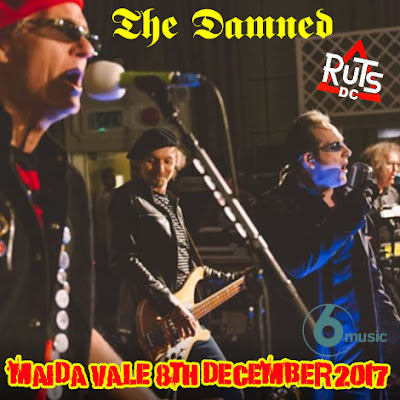 Happy days!!! I with a lot of people had been looking forward to this since it was first announced last month. Stupidly, it didn't cross my mind to buy tickets, must be my age.

Steve Lamacq is a star of the highest order. With his Harlow credentials he has long been a supporter of The Newtown Neurotics (a band very close to my heart) and he has championed Ruts DC since they plugged in once again in 2011. He really has taken off where Peel left off.

So, a BBC 6 Music Christmas Party. What a fantastic idea. 40 years on from the so called Year Zero and the passion for this genre of music seems little diminished. Such was the magnitude of that particular earthquake that the aftershocks are still being felt in the late 2010's. Will the same hold true for some of the musical movements that followed in its wake.... Madchester and Brit Pop. Only time will tell on that one.

Ruts DC stepped up and delivered a perfect 30 minute sermon of intelligent punk. A triumph! And once again the perfect compliment to The Damned.

The Damned then took to the stage and delivered a tight set with 'new boy' Paul Gray. With no disrespect to Stu, it is great to see Paul back in the fold. It was a surprise to me as I was under the impression that he was seriously suffering from hearing difficulties.

With Paul Gray once again on bass duties, I really hope that we can look forward to a 'Strawberries' album tour, in my opinion the only one of the Damned's 'Holy Trinity' that hasn't yet received the full album treatment.

The Damned's set was great and I have to say that it was a brave move to play a new song, 'Standing On The Edge Of Tomorrow' after just one rehearsal. Proper punk attitude from The Damned, and for the record it sounded great!

With the interviews, Brix Smith's DJ'ing and the two live sets, this was a broadcasting triumph. Perhaps this is something that could be done each year on 6 Music. Given that we are now celebrating punk band's 40th birthdays, perhaps additional Summer Balls could also be the order of the day.... just to fit them all in! 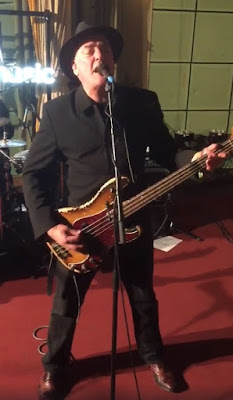 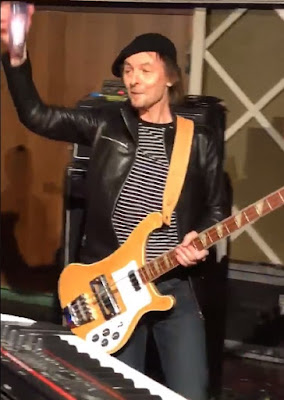 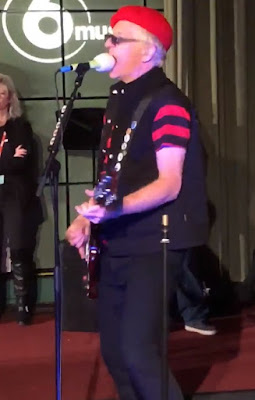 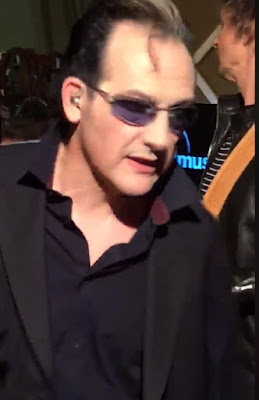 Email ThisBlogThis!Share to TwitterShare to FacebookShare to Pinterest
Labels: 2017, Ruts DC, The Damned 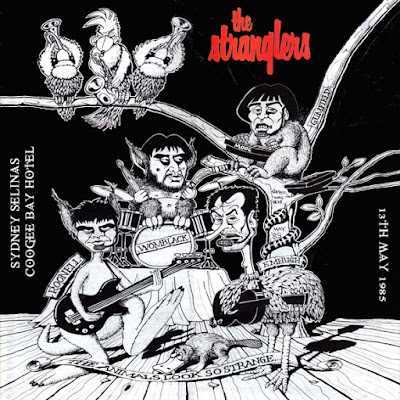 Here is a gig from the Australian leg of the massive 'Aural Sculpture' tour that saw the band play the Selina's venue at the Coogee Bay Hotel in Sydney. From what I have read this was (the venue still exists) something of a dive. The audience are very loud and I suspect a little drunk! 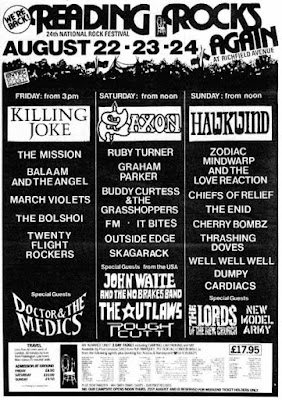 Something of a punk supergroup here with Stiv and The Lords of the New Church, here from the last day of the 1986 Reading Festival.

Email ThisBlogThis!Share to TwitterShare to FacebookShare to Pinterest
Labels: 1986, The Lords of the New Church 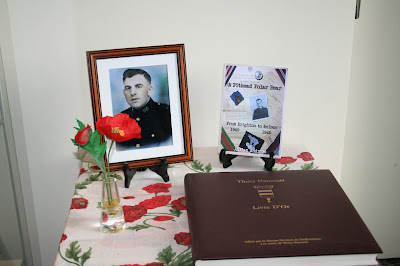 I am very pleased to announce that my book 'A Pithead Polar Bear From Brighton to Belsen 1940-1946' was sent to the printers yesterday for a second print run. This is a somewhat revised version containing additional chapters describing events following the initial publication. Details can be found on the site below and the book will be available from 15th December.

Alternatively, send me a message and I will provide details on how to get a copy.

With All best wishes. 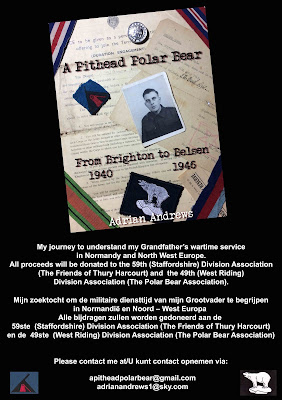 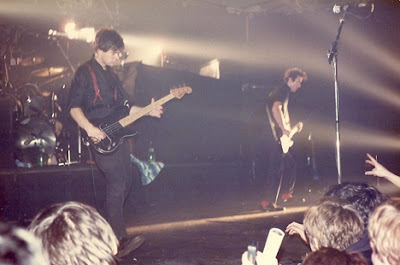 Here is an anniversary gig from a mind boggling 36 years ago. From the 'La Folie' tour, the set list features some really heard tracks from what for my money is the band's most underrated album.

Some time ago, Phil Coxon wrote up his tour diary for the dates that he did (not to mention the hardships that he endured following the band on a shoestring budget on a UK tour in December!) for the official site.

Here's what he had to ay about that night in Bath.

'I’m on my own from now on as Dean has used all his holidays. I get there pretty late but luckily bump into JJ and the tour manager outside and get in just as Taxi Girl are finishing. I quite like them, some venues they go down well and some not so well. Mark is a big fan of Taxi Girl and we stand in the foyer talking to them as we wait for The Stranglers. There’s a couple of faces that are looking familiar too-Krista and Lynsey who hail from Evesham.

As Waltzinblack starts I wonder if there will be any trouble here as there was on the WWTW tour when JJ decked a skinhead on stage. I have a look around but can’t see any skinheads. The show passes off trouble free. It’s a good crowd with proper security–you know they’re there but
they don’t stop anyone having a good time! There’s a couple of mini stage invasions… One lad can’t quite make it fully on stage so he just lies there while JJ virtually stands on him with that sick, sadistic smile on his face. As the song ends, he thanks JJ and crawls back into the crowd! I manage to clamber up by the speakers and get a really good view and start working overtime with the camera.

Brilliant gig tonight, really enjoyable helped by unobtrusive bouncers. The night ends with a train to Bristol and another night in the waiting room…'

Cheers to Phil for the photo and the words. 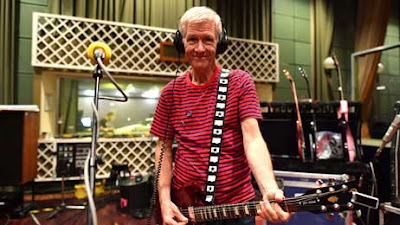 'Steve Lamacq returns to Maida Vale for an annual Christmas party, and this year we're painting the holiday season punk. The Damned will be performing live from the legendary Maida Vale studios, ahead of their huge tour in 2018. They'll be joined by fellow punk pioneers Ruts DC, who'll be providing us with a second blistering live performance. Brix Smith Start, ex-member of The Fall, is behind the decks, spinning some classic punk tunes in between sets. And we'll be joined by football legend Stuart Pearce, who'll be telling us about his devotion to punk'.