When Gaye Got To Play With Iggy 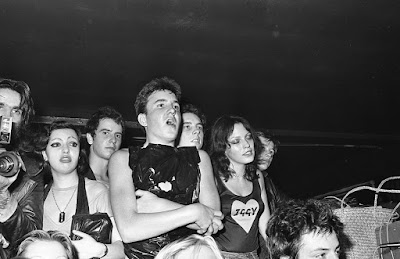 If there is one thing of which Gaye Advert cannot be accused it is of hiding her love of Iggy and the Stooges. Over two night's (30th September and 1st October 1977) MAM promoters fixed it for the young lady to appear on the same stage as her hero when the Adverts were billed as support for the 'Godfather of Punk' over two nights at the Rainbow Theatre in London. In a career that, I think it is fair to say, never hit the heights that it should of, both Gaye and TV view this occasion as one of the highlights for their band. So much so in fact that TV wrote about it years later in his 'Punk Rock Poem'. 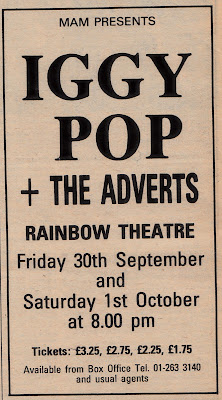 It was strange being in a punk rock band
People gobbed on us, then shook us by the hand
We played every toilet in this green and slimy land
First of all for fifteen quid, then - later on - a grand!

Didn't get to the U.S.A. as planned

And, looking back, we didn't change the music scene a lot
But we did have one hit single, and supported Iggy Pop
And sometimes people tell me that the Adverts changed their lives
And that's nice