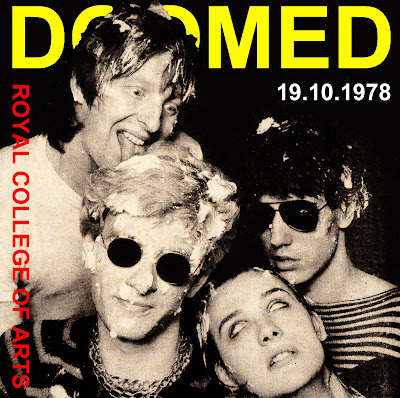 They may be one of the most enduring bands to have emerged from 1976's foetid punk rock womb, but never let it be said that that longevity implied any king of stability within.... few bands, with the exception of the fall can boast more musicians passing through its turbulent ranks!

At this stage in 1978, Rat had already left once before becoming a White Cat that was certainly devoid of nine lives. Like-wise Captain had enjoyed an even shorter reign in King and Dave was briefly one of the Doctors of Madness. Each of these post Damned Mk I ventures were doomed to failure, so why not come together once gain as a unified Doomed!

At this gig at the Royal College of Arts in London, bass duties were fulfilled by Henry Badowski but earlier in the summer Lemmy had filled in and a month later Algy Ward appeared.

The Doomed themselves were a fleeting incarnation of their more famous parent outfil as within a year, The Damned proper would again be on our TV and radios with material from the mighty 'Machine Gun Etiquette'.

Thanks to Barry Hutchinson for the audio. 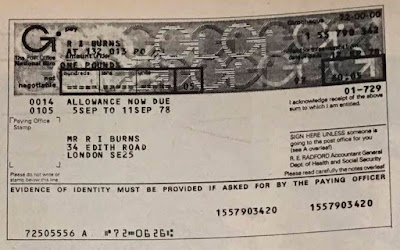 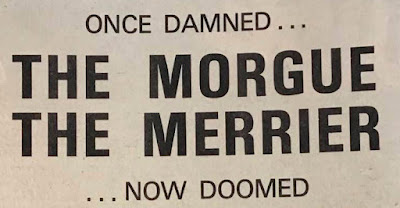 The high pitched whine coming from the back room of the modest terraced house in SE25 is the sound of Captain Sensible earning a few bob. The Cap’s hunched over the hast of half a dozen little gold coloured trophies mounted on little wooden blocks. The kind a local darts team such as the one which
includes the Captain's milkman get for their efforts when they top their local league. The trophies couldn't be less extravagant - there's nothing on them to indicate what, when or where, just the recipient's names on the base, is all. The Captain is, to be absolutely honest, no master engraver, the lettering is no copperplate. He does enjoy his work though; once the trophies are done, Cap moves on to his guitar, drilling his moniker on the instrument no less than three times.
But what can a poor boy do?
What can a poor boy do when he's just received a Giro cheque from his local Social Security office made out for the colossal figure of - wait for it £0.05. Fivepence. "And I'm supposed to live on that for a week!" says Cap incredulously. He says he'll frame it and who can blame him? It's the kind of thing you read about in the papers, an ultimate absurdity delivered in an envelope with a ninepenny stamp on it and at who can be bothered to calculate what cost in manpower? The lunatics have taken over the asylum alright. With a vengeance.
Captain Sensible and Rat Scabies sit, sipping beers and chatting, in a scene of almost total devastation - a couple of rickety chairs, a battered cupboard , walls covered in graffiti and a 'carpet' underfoot made of crumpled cigarette packs, empty beer bottles, raggedy bits of newspaper and disgarded rags. This surprisingly odourless squalor isn’t as you might quite understandably assume some seedy clublet's excuse for a dressing room. The graffiti on the walls - boldest of which is the solitary foot high 'KING' scrawled at shoulder height across one wall - and the little pile of Bunty comics by the window give the game away: this is The Captain's own bedroom, upstairs in that same Croydon household. Captain Sensible, known to the DHSS as Mr. R. I. Burns, is the lead guitarist for The Doomed. He previously led a combo name of King, now reduced to mere writing on the wall. Rat Scabies (a drummer)
is also with The Doomed. As 'Chris Miller' he was the focus of White Cats, now extinct.
These two gents were, of course, half of The Damned. You remember The Damned? I do, and fondly. And - irrespective of ' what some anonymous snide Teazers compiler (a reference to part of a weekly with No More Energy, ho, ha, har) might have suggested recently - I missed The Damned when they were gone.
And so did they, in the end. Captain Sensible's King was the shortest-lived of the intermediate liaisons. They did a week's residency at Le Gibus in Paris ("It was, er, funny" - Capt. Sensible) and a John Peel session before collapsing. Rat's White Cats lasted longer - two gigs outside London, maybe a score in the burgh itself - "Every toilet in London," says Scabies, pulling a face. Two squibs, in a nutshell. It was, both survivors agree, largely a question of personnel. 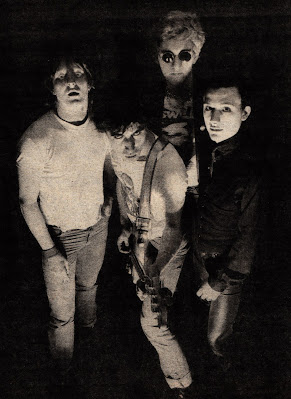 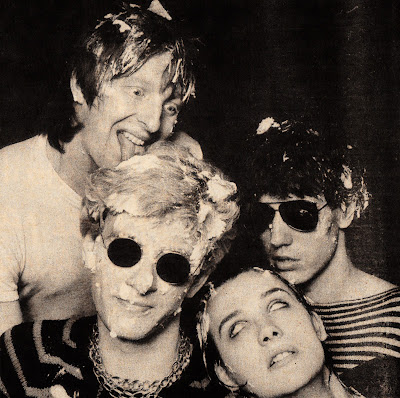 The Doomed ape The Damned. L to R: Scabies, Sensible, Vanian and Henry Badowski.
I always thought the best part of growing up was the throwing up, didn't you? Henry had the last laugh. "I'm glad Captain blew it," he quarter-Polacked mischievously. "I was terrified it was gonna be me." He probably blew it the next night. I wonder if his moustache has washed off yet?
Interview by Giovani Dadomo.
Posted by Musky03 at 17:34

Email ThisBlogThis!Share to TwitterShare to FacebookShare to Pinterest
Labels: 1978, The Damned, The Doomed