Most folk who pass by this site will be familiar with Chelsea. They were one of the first wave of bands that sprouted from a collection of London based like minded people. When London SS split, bass player Tony James and drummer John Towe teamed up with Gene October and the sneer that went on to become Billy Idol and formed the first incarnation of Chelsea. They were very short lived and after only a handful of gigs the soon to be Idol, James and Towe departed to form Generation X. Gene retained the band name and regrouped.

Although Chelsea released a couple of singles whilst punk was in the ascendency, their debut, eponymous album did not see the light of day until the summer of 1979. Then came another split and more line up changes until the got back into the studio in January 1982 to record their second, and in my opinion definitive album, 'Evacuate' which was released to critical acclaim in May of that year.

A Chelsea set these day still features quite a bit of that album and the singles released in the '81/'82 period are very strong too.

Here's a review of the album that appeared in Record Mirror. 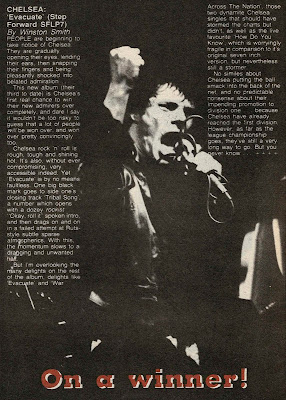 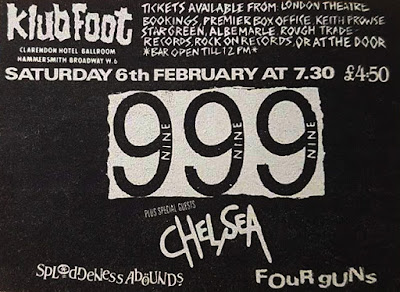 I am gutted that I wasn't at this gig... what with 999 headlining and the Four Guns in the bill too, a great band from Brighton (a fusion of Generation X, The Clash and the Small Faces!) that I used to go and see quite a lot back in the day.
Klubfoot (Clarendon Hotel) Hammersmith 6th February 1988

Email ThisBlogThis!Share to TwitterShare to FacebookShare to Pinterest
Labels: 1980, 1988, Chelsea