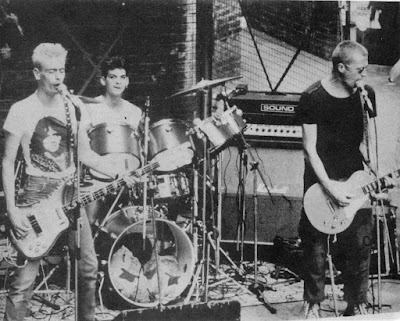 The Stranglers may have dictated the way I dressed back in the '80's but this band informed my thoughts on politics (dictated being the wrong word here). I have for sure said it on this site before that it was Spitting Image (the first incarnation) and the Miner's Strike that hammered home the message into my 16 year old brain that politics matter. Whether you like politicians and the wily ways of those same politicians or not, they make decisions that affect your lives for good or bad. No one can afford to let our political leaders ride roughshod over the things that are important in our lives.... and that is true whether you are coming from the perspective of the left or right.

The Newtown Neurotics come/came from Harlow in Essex, the town where I have worked for 18 of the last 26 years. These days they only play a handful of gigs a year. Things have moved on, sadly bass player Colin died a few years ago, drummer Simon lives in Brighton, so its just Steve that can be seen on occasion in Harlow Town in his distinctive shades.

Back in the late summer of '88, The Neurotics (by that time) had released their final album, the brilliant 'Is Your Washroom Breeding Bolsheviks?', but by that time the end was in sight. Colin Dredd left the band for health reasons leaving the band with just a handful of gigs left to play before they called time.

I was lucky enough to see a couple of those swansong gigs, an anti-fascist gig at the Electric Ballroom as well as the last gig at the Fulham Greyhound on 29th October 1988. That gig was amazing, but this is the one that I really would have wanted to be at. The farewell to Harlow on 10th September 1988 with a marathon 37 song set.

Here the venue is as important as the band. The Square was an oasis in an otherwise drab new town, and I am not running Harlow down here it's just that that venue was so very special to musicians and punters alike. The land is owned by the NHS and time was called on the contract several years ago. The venue stood vacant for a year or so before being demolished. The plot has subsequently been fenced off for almost three years now... to what end? If no plans existed for the land at the time of the enforced closure why on earth could it not have been allowed to stay open! Rant over.

Anyway, here is what must be one of the best Neurotics gigs ever. 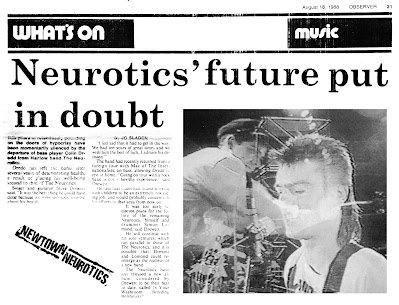 Contemporary article from our then local newspaper The Observer (18th August 1988)
Posted by Musky03 at 22:37

Email ThisBlogThis!Share to TwitterShare to FacebookShare to Pinterest
Labels: 1988, The Neurotics, The Newtown Neurotics