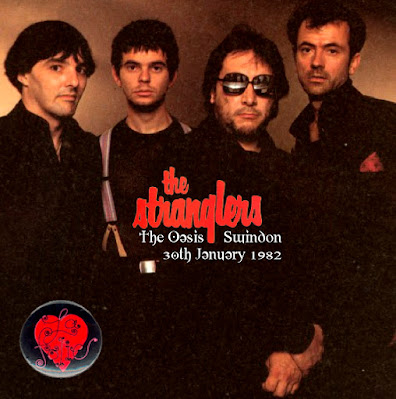 Yesterday I put out a community SOS for a replacement of this recording. Today however, it seems that my PC is less temperamental and kindly allowed me to burn this old CD.

I know I'm a bit late to the party, but in addition to the ABC... thread I an going to start this weekend something of a 'La Folie' thread seeing as I narrowly missed its 39th birthday recently.

This makes for a good start, from the second leg of the tour. The huge interest in the Swindon gig that left hundreds of punters disappointed outside could no doubt be attributed to the fact that in between the December '81 dates and the January '82 dates The Stranglers enjoyed an unexpected chart success with 'Golden Brown' and with venues pre-booked prior to the 'hit' some theatres struggled to cope.

The Swindon gig was one of a number of shows on the tour where the band took a stance against spitting. Their decision to spank an unfortunate miscreant with over-active salivary glands made for a good punk rock story in several local newspapers up and down the land. At Swindon, discipline was dished out at the end of 'Down In The Sewer'.

Perhaps more interesting is the fate of the photo of 'Diana fucking a donkey' that Hugh refers too! Answers on a postcard please.

01. Down in the Sewer
02. Just Like Nothing On Earth
03. Second Coming
04. Non Stop
05. The Man They Love to Hate
06. Who Wants the World?
07. Baroque Bordello
08. Golden Brown
09. How to Find True Love and Happiness in the Present Day
10. Duchess
11. Tank
12. Let Me Introduce You to the Family
13. Tramp
14. The Raven
15. Nuclear Device
16. Genetix
Here are a couple of articles from the Swindon Evening Chronicle that concern the gig (gleaned from Jet's scrapbook).
Evening Advertiser
1st February 1982
Swindon

Spitting fan who had to bare it!

Pop group The Stranglers had a special way of dealing with spitting punk fans.

They were showered with with spit at the start of their sell-out Swindon show on Saturday.

So they hauled one of the offenders onto the stage – and pulled down his trousers and pants.

And in front of 1,500 fans, they administered a jolly good spanking.

The foul spitting – which was supposed to be a way of showing appreciation - stopped immediately.

A Stranglers’ spokesman said the group, not unnaturally, hated being spat at. He said: “They often have to make an example of someone – and this method seems to work best.”

Hundreds of fans were turned away from The Oasis before the show. Manager Mr Roland Honeybunn said they could have almost sold the show twice.

A plate glass door valued at around £200 was smashed as fans attempted to break in before the concert.

The door was shattered as youngsters struggled with bouncers.

For a full review of The Stranglers see Scene on Friday.
Evening Advertiser
5th February 1982
Swindon
By Barry Leighton
Now that’s a spanking good idea!
The Stranglers were plunging through Down in the Sewer when the spitting started.
Cornwell, a swarthy type, isn’t a man to be spat at.
Hauling a particularly vociferous and then amazed offender to the stage, Cornwell and roadies exacted punishment.
They whipped off the blighter’s strides and administered a jolly good thwacking.
Three thousand eyes watched gleefully. The struggling, squealing punk was red cheeked with embarrassment. An example had been made – and the vile spitting immediately ceased.
It was the highlight of the sold-out Swindon Oasis show on Saturday; a good, if not particularly great gig in which the men-in-black merged their doom-laden attack of yore with glowing new-found maturity.
It was their first Swindon show since a memorably sparsely attended Affair in ’77.
But even they, The Stranglers were the odd-men-out in the so called new wave explosion.
They coincided, rather than contributed to punk. When spikey brats were preaching anarchy and rebellion, The Stranglers were dwelling on the darker, gloomier, seedier side of life.
They were labeled sexist (with some justification). It killed them off in the eyes of the make ‘em break ‘em pop press.
But now a hit single. An album of intermittent excellence. The Stranglers are back in (big) business.  Dave Greenfield’s thickly swirling keyboards are still the backbone to the group’s quasi-Doors sound.
He is nestled behind a battery of keyboards in a black-clad tower. Cornwell and Burnel are below. Guitars slung low, the obvious (focal) and vocal points. Grim-faced Jet Black thumps dourly amidst the black backdrop.
There is invariably a splatter of ugly pomp and grandeur  about the music. Songs are either punchy or insinuating. But they are often overlong.
They played Nuclear Device. “The best bloody reason in the world for writing a song” says Cornwell.
Golden Brown wafted deliciously across the hushed auditorium. It is a haunting, shimmering piece which refreshingly eschews the format structure of a hit single and still made it to the top.
Posted by Musky03 at 22:12

Email ThisBlogThis!Share to TwitterShare to FacebookShare to Pinterest
Labels: 1982, The Stranglers