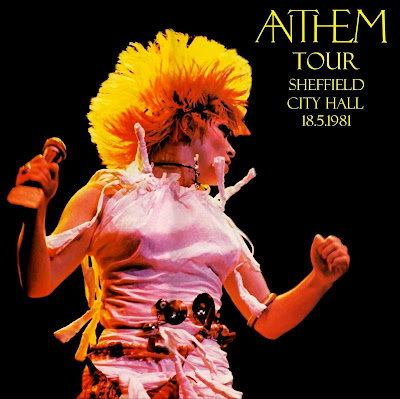 I loved it at the time. 'Anthem' was Toyah's 1981 album with two of the biggest hits of the year, 'It's A Mystery' and 'I Want To Be Free'. As mentioned elsewhere on this site I saw the band in 1982. Before 'Anthem' I had 'Sheep farming in Barnet' which is a far more interesting proposition, and for those that still do appreciate a bit of Toyah, an album just about to be released as a 40th anniversary deluxe reissue.... and it does look lavish.

Hey, in '81 I was 12... much as I would have loved to have seen The Stranglers then, my horizons were limited by entry restrictions to under 18s.... that limited the options to The Brighton Centre and Toyah and Adam and the Ants as first gigs. Oh well.

Email ThisBlogThis!Share to TwitterShare to FacebookShare to Pinterest
Labels: 1981, Toyah