A Few Words On Merchandising

The advertising on the official site of a 35 year anniversary commemorative CD presentation which places Rattus and Giants side by side provoked some strong opinions amongst fans on the unofficial Burning Up Time Forum. See for yourselves, but I think that it’s fair to say that the product itself and the cost has not been particularly well received.

Over the course of the band’s career, they have in the main maintained a high standard of quality control over the merchandise that has been offered for sale on tours or through S.I.S. etc (drumstick pens and beer mats aside!). Generally too, they have been spot on with the visual aspects of the band. Not bad when you consider that The Stranglers are one of the few successful bands to come out of the first wave of UK punk that were not ex-art school.

The band through their merchandising have unleashed upon us a veritable menagerie of beasts from rats to ravens, panthers to spiders with the odd alien agent thrown in for good measure. Many of these classic designs in their original forms have been unavailable for many years and so I would suggest that an excellent way to mark 35 successful years in this horrible music business would be to re-issue some of those designs as they are best known to the fans.

As fans, we are now broader and heavier than perhaps we once were and replacements are long overdue!

So can we have

Merchandising is a very important aspect of the industry, but with the companies that produce such material can I think, if not sufficiently scrutinised, fail to make the connection between the products and the intended audience (buyers).

Any takers for a ‘Motorhead’ beach ball…… 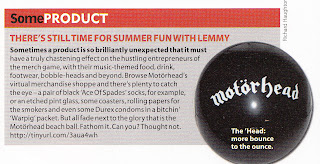 Who sanctioned that!? Can you imagine Lemmy cavorting across the sands in his speedo’s in pursuit of such an item? Why produce such a thing at the expense of something that the fans would really want to own!

There I have said my piece.

Email ThisBlogThis!Share to TwitterShare to FacebookShare to Pinterest
Labels: 2012, Merchandice, Motorhead, The Stranglers