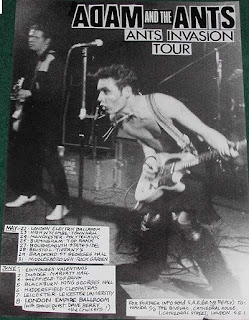 In 1979 and 1980, Camden's Electric Ballroom was a regular haunt of the rapidly evolving Ants. Taking on board the advice of Malcolm Mclaren in exchange for his band, Adam had by this point adopted the Burundi style drum sound (achieved by the fact that the band had two drummers) that was to be a trademark of the Ants' sound in what was shortly to become their most successful commercial period. Recorded in the same month that the breakthrough 'Kings Of The Wild Frontier' album was released, as part of the 'Ants Invasion' tour, the set drew on material from that album, but earlier singles and the brilliant 'Dirk Wears White Sox'.

So this recording is from a time when Adam (and his band) were on the threshold of pop stardom and very different world of Royal Command Performances and Multi-Coloured Swap Shop.

I thought they were great in this period. It is interesting to note that in his current shows (sadly without Marco), the set fully recognises the early pre-Kings material.

Artwork is included in each folder.

Email ThisBlogThis!Share to TwitterShare to FacebookShare to Pinterest
Labels: 1980, Adam and the Ants