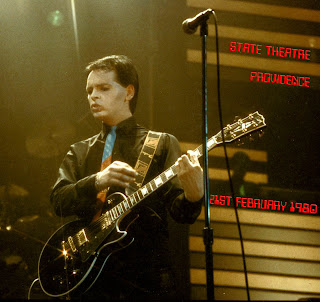 No Guilty pleasure here I assure you. I'll happily nail my flag to the post and declare that I was .... a 'Numanoid'!

Loathed by the serious music press, snubbed by the BBC and yet still capable of rising phoenix-like from the dampened embers of a career in decline.... that's Gary Numan. Sound familiar?

Love him or loathe him, Gary Numan was pretty much their from the outset of punk.Tubeway Army were a gigging outfit by late '77. Moreover, I recall reading that when pressed for his opinion on early punk, one John Lydon declared his respect for the music of X-Ray Spex, The Adverts and.... Tubeway Army. In addition, I was once told by someone close to the band that at one point Pete Shelley nearly jacked in Buzzcocks in an attempt to join Tubeway Army. In short, they had some form.

Whilst Gary Numan did not invent electronic music (there is a queue of candidates in front of him with a more legitimate claim to that honour (Ultravox, Roxy Music, Kraftwerk.... a host of Krautrock bands etc etc)) never before had a synthesiser been used with such power. With the 1979 breakthrough single 'Are Friends Electric?' it was immediately apparent that this was something very different that this pallid Londoner was offering.

To listen to 'Replicas' and 'The Pleasure Principle', the two consecutive 1979 number 1 albums from Tubeway Army and Gary Numan respectively, is to be propelled instantly back to the early '80s, so much so that I can smell the oil filled radiator that I had in my bedroom at that time!

Material from the above mentioned albums is unsurprisingly heavily represented in this set.

Also on stage tonight were: