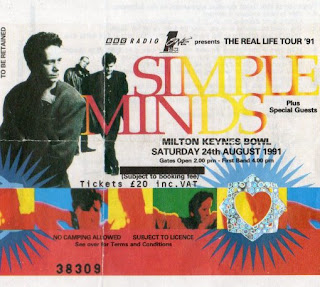 I have had a request from gobshyte to upload this gig (not sure if this was the BBC broadcast or just a very good recording, I suspect that it's not from radio as it's longer than I remember and longer than I would expect if the Beeb were also broadcasting the headline set).

At the time, this really set alarm bells ringing in my head, but with hindsight I can fully understand the band and band's management rationale for getting on to these prestigious stadium dates supporting Simple Minds. What better way to showcase the band after such a big change.

No, I admit it, the problem is all mine (all mine, all mine). I first became aware of Simple Minds as a successful band coming out of New Wave (I did not like them). Simple Minds went on to become a massive anthem driven stadium rock band (I hated them!). So, in short, this unlikely coupling was not to my liking at all. Quite clearly, there is no accounting for taste, but in my head Simple Minds were purely a Britannia Music Club band!

Nevertheless, this gig gave the band some national critical radio exposure at a time when it mattered most.