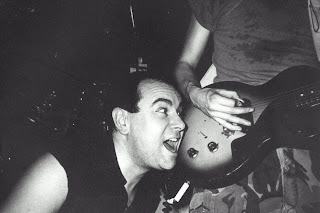 Here's a personal favourite of mine. I give you 999. Dismissed by some as bandwagon jumpers, members of 999 were loaded with proto-punk credentials. Rather than adopting a musical style to fit what was already happening, I believe that they merely evolved into the scene that they themselves had a hand in shaping (not unlike The Stranglers in that respect).

Nick Cash, a.k.a. Keith Lucas, had studied under Ian Dury at Canterbury Art College and joined Ian in Kilburn and the Highroads, a band that were massively influential to what became the London punk scene of 1976. One of the earliest Stranglers gigs was as support, along with the Pistols,  to the Kilburns as they played their last gig at Walthamstow Assembly Hall on 17th June 1976. Moreover, 999's drummer Pablo Labritain, a friend of Joe Strummer, played briefly in an early version of The Clash.

999 also have a long association with The Stranglers providing tour support across Europe in 1978. The 'new' member, Arturo Bassick, was one of the first regular followers of the band and appears in the 'Grip' video. In his post-Lurkers band, Pinpoint, he supported The Stranglers when they appeared at The Red Cow in September 1978.

999 later supported The Stranglers at Fontwell Park in 1993. At that time JJ suggested that someone interview the band for a feature in Strangled. I did the interview at The Swan pub in Fulham before a gig . Somewhere I have the full transcript which I will put on these pages as soon as I find it.

With songs such as Nasty, Nasty, Emergency and Homicide, it is beyond doubt that they were a significant player in the late '70s scene.

This radio broadcast from their extensive 1980 US tour draws heavily on the 'Biggest Prize In Sport' album of the previous year.

Email ThisBlogThis!Share to TwitterShare to FacebookShare to Pinterest
Labels: 1980, 999