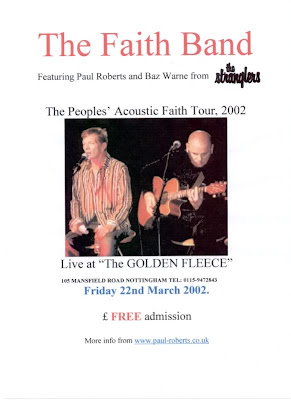 Here's a gig with a bit of a tale. On this occasion under the banner of the Faith Band, Paul Roberts and Baz Warne played a low key gig in Nottingham. The gig was promoted by a friend Barry Spooner.

In his own words:
'A very special year for me not least of all because I had the pleasure and privilege of becoming a “promoter” for Paul Roberts & Baz Warne when they performed as the Faith Band in Nottingham on ‘The Peoples Acoustic Tour‘. This tour was an opportunity for fans to organise their own gigs. Myself and about another dozen or so fans jumped at the chance (maybe ‘jumped’ is not the correct word)!. To cut a long story short I joined forces with a Nottingham city centre based landlord to put on a free gig which basically showcased PR’s solo material and very successful it was too, even if I do say so myself. Fans came from all over the place and ‘The Golden Fleece’ rocked that night. But all of this didn’t happen without mucho blood, sweat & tears. I even went to a Hugh Cornwell book signing (’Song By Song’) armed with home made flyers to try and publicise our event. Hugh even autographed a flyer for one fan! Anyway, 3 months of sleepless nights paid off.'

Thanks to Paul B for the recording and Barry S for the words and the photos. 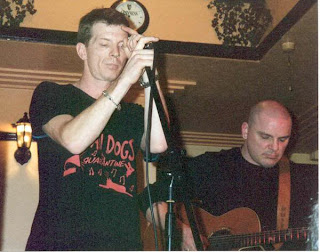