It was my good lockdown fortune recently to discover some scanned copies of Record Mirror, a now defunct publication that was for many years one of a quartet of weekly music papers that kept British music lovers abreast of all that needed to be known.

These music papers chronicled the music related highs and lows that were such a big part of many teenagers lives. The story of Malcolm Owen, charismatic frontman of The Ruts, certainly filled the bill of a low during the spring and summer months of 1980.

The band had been through a tumultuous 1979, during which a series of blistering singes had catapulted the band into the punk big league. High profile gigs (some now of legend) supporting The Damned, followed by their own headline dates boded extremely well for the band. However, the euphoria felt by The Ruts in that closing year of the decade was short lived. It was just months into the new decade that trouble hit the quartet. Malcolm had succumbed to the fatal escapist opportunities offered by heroin. The habit made him withdraw from the company of his fellow Ruts, even whilst on tour, dates being cancelled in the end as the drug use exacerbated perennial throat problems.... a disaster for any lead singer. The capacity for the band to function in a way that allowed them to capitalise on the success of the previous 12 months work was seriously stalled.

Eventually Malcolm, openly spoke about his drug dependence (a very open secret at this point in time), coming clean (no pun intended) about his own personal  problems. This article appeared in the 31st May 1980 issue of Record Mirror. In it Malcolm acknowledges the problems associated with that particular drug and its potential to ruin many other young people's lives. If anything the tone is positive and the journalist talks within the piece of new music from the band. 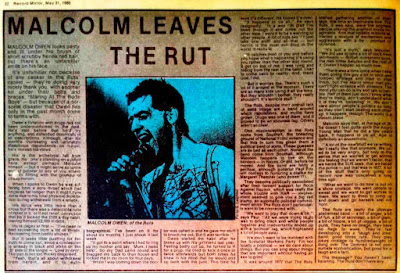 Email ThisBlogThis!Share to TwitterShare to FacebookShare to Pinterest
Labels: 1980, The Ruts