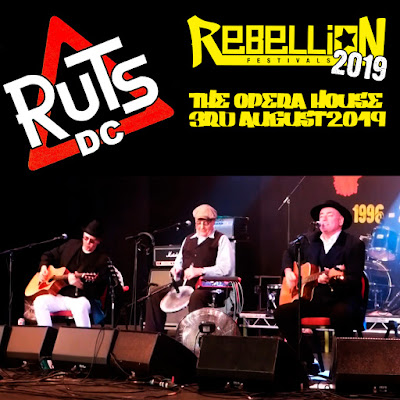 In these dark and dangerous times that we are living through right now, many musicians with no venues to play are being resourceful and turning the cameras on themselves. Ruts DC are no exception. They have been hosting weekly episodes of 'Ruts TV' that have thus far featured a mix of Ruts and Ruts DC archive footage along with a bit of chat about the plans for the band as well as how their solitary days are being filled.

In this weeks installment Segs rued the fact that under different circumstances the band would have been winding up their first acoustic tour (now rescheduled to take place in August...... which may or may not prove to be the case sadly). He also mentioned the occasion last year when they played another acoustic set in the rather magnificent Opera House at The Rebellion Festival, which is uploaded for you good people here. Cheers Chatts99.

Thanks also goes to the Ruts chaps for their heartfelt tribute to the man with a massive swelling organ, Mr Greenfield!