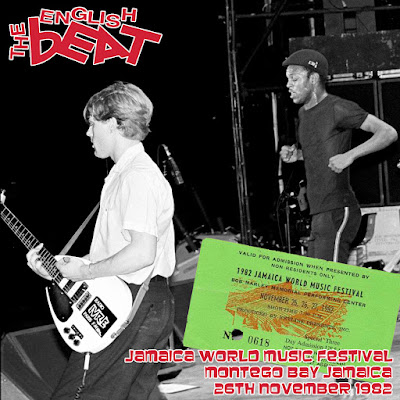 It is no secret that I like to mix up punk and ska. 2 Tone to me is every bit as important as punk when it comes to music with a message. TRB and The Clash could stand on a stage under a Rock Against Racism banner and tell a converted audience that the British Movement and The National Front were the scourge of Britain and must be resisted which was true then and is true now in terms of their modern day Alt-Right equivalents today. I cannot knock that but it was the musicians in those great 2 Tone bands (and here I am talking of The Specials, The Selecter and The Beat) that were really on the front line. These were the people who were taking their message of Peace, Love and Unity out into the towns and cities of Britain in 1979 and 1980 just when racial tensions at street level were at their worst. How did those bands cope when a small but not insignificant proportion of the audience at every gig were affiliated with one of another far right organisation? How do you stand on stage and perform in front of elements of the crowd who are chanting 'Seig Heil!'. How does a band keep going when that element wants to beat up the black folk in the band for being black and the white folk in the band for having the audacity to be on stage with the black folk? I know each of those mixed race 2 Tone bands have some horrendous stories of those times, but in the end I think that they won through and who can deny the power of their lyrics when it came to breaking down race prejudice in the minds of young and impressionable 'fans'.

Being of a certain age, 'pop stars', 'rock stars', call them what you will, have a habit of dying and that has happened with an alarming frequency over the past few years, culminating for me in the last weeks with the loss of Florien Schneider and of course Dave. But the loss of Rankin' Roger early from cancer was a hammer blow. He was such a genuine guy, a real performer and man of the people.

The Beat were really something of a treasure. So well respected (They supported The Police, REM, The Clash.... when these were the biggest bands in the world) and yet they were so down to earth, happy to play small town halls to an appreciative audience.

For all this talk of facing down the National Front in the Top Ranks of the UK, I don't suppose at this particular gig there was much racist shit going on.

Enjoy one of Britain's greatest bands.

Email ThisBlogThis!Share to TwitterShare to FacebookShare to Pinterest
Labels: 1982, The Beat, The English Beat