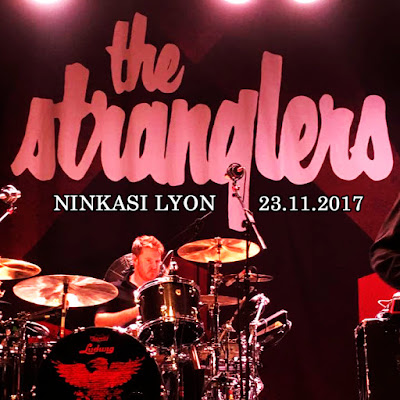 Here's the second installment of the weekend's collaboration, thanks again to all involved. Here's the band in Lyon and the punters for sure got a treat on this night with the inclusion of N'emmenes Pas Harry in the set!

Here's the background from Chatts99 himself:

The usual group of us decided to head over to France, via Geneva, to catch the first 3 dates of the November French tour, Annemasse, Lyon and Paris. There was a gig between Lyon and Paris but I cant remember if it actually took place. I know it was an almost impossible venue to get to for us as
we like our late nights and comfy travel.

So, this is night 2 in Lyon. Beacause of the logistics of the travelling we decided to stay here for an extra night before going on to Paris, a correct decision as the City surprised us and we thoroughly enjoyed the extra day exploring a little and drinking more.

I don't remember too much of the gig itself apart from it being very warm inside but the setlist was different enough from the previous night that it makes sense to upload these together, as far as I am aware the rest of the dates virtually follow this setlist with maybe GBG and ADAAOTN rotating in the encore.

So here it is. I have had an original file set on my FLAC player since the show and my fellow travellers have the same file set and I had traded it with one or two fellow tapers. This is not only a serious upgrade of an already very nice recording. But as the work has been done on the raw WAV file this is to be viewed as a completely different version.

Notes directly from Shadow23 on his work are as follows.
"Loaded file into Adobe Audition and rack up a bunch of effects to add more life and sparkle. I used a 20 band EQ to boost the keys and guitars at one end and the mid bass at the other, along with some stereo expansion and light multiband compression to even things out"

He has previously told me that this is basically saved on his PC as the "Chatts99" setting.

A couple of pics are included and I believe another fellow Stranglers fan, DIME member Adriana will be adding some artwork as well.

This needs to be played often and loud. It had brought back some great memories of another great trip with the best friends. With the passing of Dave Greenfield the future is unknown, but the music remains and yes this isn't the Band of the 77-82 musical perfection, it doesn't have Hugh Cornwell
at his sarcastic and quick witted best. BUT it is the band that even just over the last 6 years, since I have been recording them, have given me so much to remember.