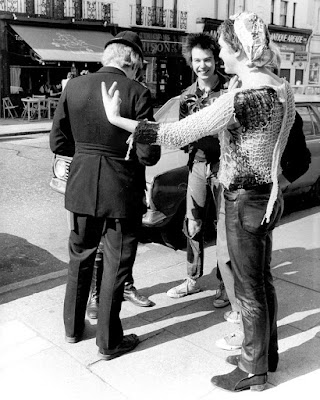 Everyone I am sure must have wondered at some point what it would have been like to be five years older. This I think is especially true for music fans. For many people, myself included, proper awareness of music that is around you, as opposed to the music that is favoured and played by your parents, kicks in at around the age of 10. Perhaps for those with older siblings in the house it may be a bit sooner. This being the case, differences of only a couple of years (representing as they do a significant percentage of  life time over those tender years) make a huge difference to an individual's experience of and engagement with the music that they are hearing for the first time.

My 18 year old daughter, who loves punk, gets annoyed with me for many reasons, one of those being because I saw The Stranglers with Hugh, Siouxsie & The Banshees, The Ramones and Adam & The Ants. She feels that she missed the punk boat (which she did), but I at 33 years her senior also feel the same. 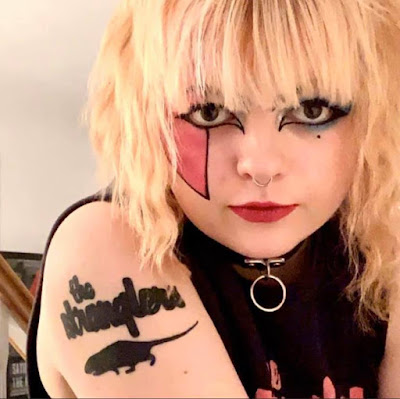 Jordan's coming for ya Mo!

In 1977 I was eight years old, the music that I was exposed to at that time was served up in the morning over breakfast, on school days, by Terry Wogan, then doing his first Radio 2 Breakfast Show stint. For this reason the airwaves in our house were ruled by the likes of Wings with their 'Mull of Kintyre', along with Chrystal Gayle fretting over the possibility of an emotionally triggered change in eye colour. In 1977 my parents were in their late '30'sand rooted in the rock 'n' roll of their teenage years (my Mum saw Eddie Cochran and Gene Vincent in Brighton on that fateful tour which is quite cool as well as Cliff Richard and The Shadows, which isn't). Although, by the time the '70's came round Elvis more often than not gave way to The Carpenters when it came to time spent on the Pye Black Box stereo. The only parental concession to the contemporary music scene came in the gaudy satin-clad form of Anni-Frid, Benny, Bjorn and Agnetha (a guilty pleasure of mine for that reason!).

Punk did not feature in our household at all. Even if my parents did scan he shock headlines of the Grundy incident over toast and marmalade, it never made it as a topic of conversation. Indeed, when the Pistols took to the Thames to outrage 'The Establishment' and the 'Jubilee ga-ga' public at large, I was clutching my commemorative coin whilst sporting a rather fetching Union Flag rosette! 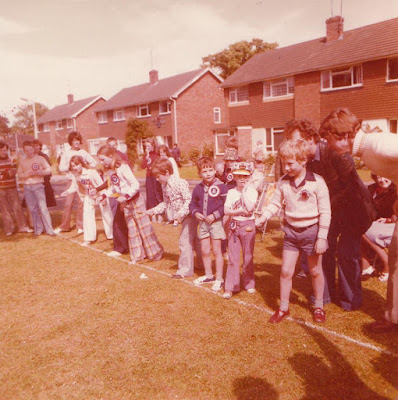 Adrian, a punk in waiting! (blue cardigan with rosette!)
June 1977

My world at the age of eight revolved around Stoke City F.C., and TV shows such as 'The Six Million Dollar Man', 'Dad's Army' and 'Some Mothers Do 'Ave 'Em'. Not 'Star Wars'! I coveted my neighbour's plastic light sabre, but never saw the film.... still haven't.

When I did finally hear current music of the type hat was considered to be too brash for a Radio 2 playlist, it was in the back room of a local pub that I was occasionally taken to by my parents on a Sunday lunchtime. The Boomtown Rats, Squeeze and Tubeway Army provided the soundtrack to that day's game of pool with my Dad in 1979. The penny dropped, in my mind, rather than into the pool table coin slot, but my wherewith all to take advantage of this new discovery was rather curtailed by both my age and by a lack of disposable income to blow on 7" singles in Woolworths and W.H. Smiths. Albums were out of the question for a while yet at that point in time!

So what if I were five years older, seeing a band in 1977 would still be out of the question in most cases. Venues/pubs maintained pretty strict age policies (much relaxed now) which would have been no good for a newly promoted 12 year old! Besides which parental blessing to see a band called The Vibrators or The Damned would be highly unlikely.

As an aside, I did go to my first gig at the age of 12, it was the aforementioned Adam & The Ants in 1981, but this was only towards the end, a long time since Adam had switched from The Marquee to Her Majesty's Theatre.

So, '77 would be out, but the musically switched on 15 year old in 1980 would have much better options with which to gain musical satisfaction. So many bands would have been within reach .... you know, the ones that make it onto those Facebook lists of band's that you wished you had seen but never did (The Jam, The Ruts, The Adverts.... in case you're wondering).

But this is all the stuff of self-isolation daydreams! Whilst the imagined 56 year old would be five years closer to retirement with a gigography that could really turn my daughter against me, as Paul Cooklin would say, 'We are where we are'. And besides, since I write this in the middle (I hope) of the COVID-19 'lockdown' (God I hate that horrible American terminology!), we shouldn't be so frivolous as to wish our lives away with such fantasies.

So. that being the case I will accept my 'youthful' 51 years and just be happy to share some of the stuff I missed.
Posted by Musky03 at 14:26

Email ThisBlogThis!Share to TwitterShare to FacebookShare to Pinterest
Labels: 1977