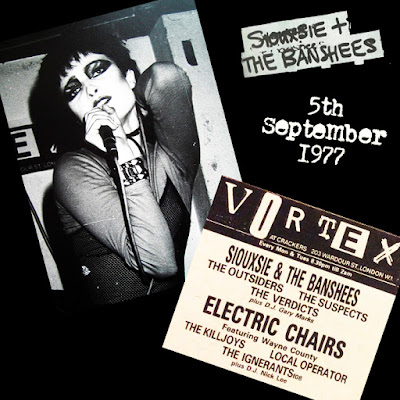 Here we have one of the few early recordings (or at least pre-signing recordings) of The Banshees. Remember what I said about The Jam, having learned their trade in front of audiences made up of  disinterested Double Diamond drinkers... well The Banshees were at the other end of the experience spectrum. On the bill at the first 100 Club Punk Festival, Siouxsie, Steve Severin, Marco Pirroni and the hapless Sid Vicious and later Kenny Morris and John McKay learned their stage craft very rapidly in the London punk clubs and the provincial venues that were still prepared to play host to the new music contagion against the will of the civic leaders.

You all know this anyway, but Siouxsie and Severin were on the scene early doors as part of the Bromley Contingent, early acolytes of the Pistols.

Early on the Banshees were one of a number of bands who decided to sport the swastika, not as a statement of political adherence but 'merely' as a sure-fire means of enraging their parents and grandparents generations. Once again in an earlier post on the Angelic Upstarts, the accompanying photographs showed Mensi wearing the Swastika armband. The Upstarts gave the same reason for choosing to wear such an abhorrent symbol. I couldn't countenance Mensi wearing one on stage today.

I can only speak from the perspective of a kid at the time, but my collection of toy guns was supplemented with genuine wartime equipment and paraphernalia, including badges and insignia bearing the Swastika and even SS marks. My Grandfather, a Normandy veteran himself picked this stuff up in junk shops for me as he knew I was interested.... in the Second World War rather than National Socialism itself! 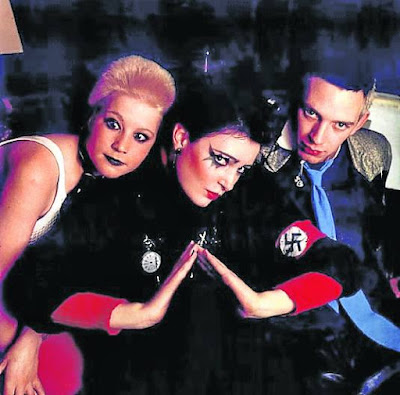 Perusing 1977 music press for the purposes of this series of posts I stumbled across the following on the letters page in Sounds of 30th July 1977.

WE ARE not Nazis and we are getting pissed off for being shunned because of misquotes by sensation seeking reporters - we don't need it!

So bollocks to all those who still haven't learnt that the press SUCKS. Also P.T. Fenton left the group a month ago. Love Siouxsie and the Banshees'

Woe betide any naive music journalist who touched in the swastika topic in leter yearss... Siouxsie, never known to be the easiest of interviewees, was known to lose it on this particular point.

Shock tactics aside, when the band did eventually secure a record contract, a staggering 18 months or so since their debut performance at the 100 Club, they went on to carve themselves a unique niche in British music with some outstanding albums to their name. 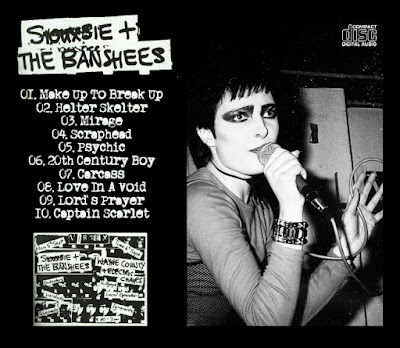 Email ThisBlogThis!Share to TwitterShare to FacebookShare to Pinterest
Labels: 1977, Siouxsie And The Banshees