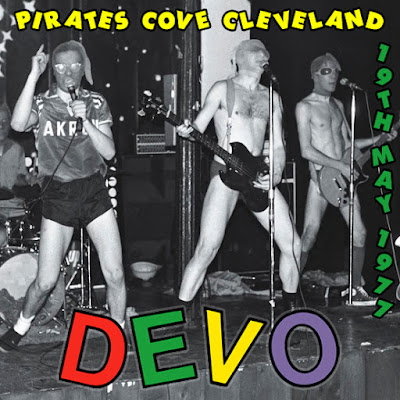 'Devo put the fluid in the punk enema bag' is how Mark Mothersbaugh summed up his band's contribution to the punk rock scene when talking to Granada's Anthony Wilson on 'So It Goes' in 1978. It is true to say that Devo are a little off the wall. Most band's start of a plan, even a manifesto, but Devo went further and created (or borrowed) an entire biological process about themselves.... they were the De-evolution band.

The starting point for the theory of de-evolution is that the human race is moving ever more in an increasingly less evolved direction.... in a word we and everything that we are involved with is becoming increasingly more dumb. The vehicle that they have, throughout their long career, used to illustrate this point in a wholly humorous and tongue in cheek way has been by reference to the work of fellow countryman and resident of Ohio too,  the Rev. B.H. Shadduck (1869-1950). Shadduck was a man of many parts seemingly, a Salvation Army Officer, a Methodist Deacon and outspoken critic of Darwinism and his evolutionary cods-wallop! In short, the good Reverend was what in modern terms a religious zealot of the highest order!

The idea of of de-evolution was a topic of interest to Gerald Casale, a student at Ohio's Kent University at the beginning of the 1970's, but it was upon meeting Mark Mothersbaugh that the two fellow students fleshed out the bones of an idea that they would carry through into their band, Devo.

Mothersbaugh owned one of Shadduck's religious pamphlet's from 1924 entitled 'Jocko-Homo Heaven bound'..... ring a bell? The front cover shows a human figure emerging from an 'ape chrysalis' whilst at the same time the divine (in the form of an angel) emerges from the human. It this tract Shadduck refutes evolutionary theory in humorous, if mocking terms. 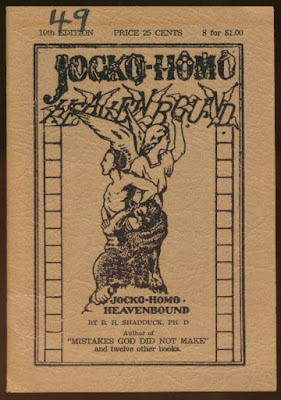 Devo were taken by the idea and the thoughts of the wayward Reverend. The De-evolution theme from 'Q: Are We Not Men? A: We Are Devo!' throughout their career, always taking a sideways glance at society and its motivations and follies. A great band, both musically and visually.

Oh and I always wanted an Energy Dome!

And David Bowie liked them and what greater endorsement is that! 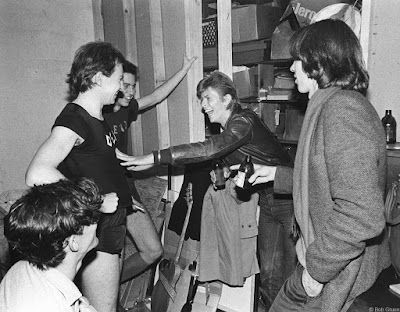 Email ThisBlogThis!Share to TwitterShare to FacebookShare to Pinterest
Labels: 1977, Devo