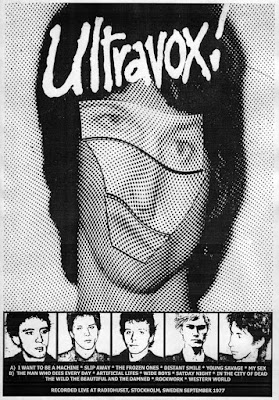 Again, something a little left field whilst still meeting the 1977 criteria. Ultravox! in the time of original vocalist John Foxx were a far cry from the chart friendly band that Ultravox would become with Midge Ure at the helm. Was it punk? I dunno, outside of the big hitters on the scene, 'punk' was a broad church early on.... and some elements fitted the bill, raw guitars, punk sounding angry lyrics and a look the shouted New Wave. With art-school backgrounds they shared the same influences as the A-listers..... Bowie and Roxy Music. However, it was their early use of synthesisers that set them apart and it was the unabashed acknowledgement of their influence often repeated by Gary Numan, who was to become one of the biggest pop stars in the UK in 1979, that sealed their reputation as early pioneers of British electronic music.

Email ThisBlogThis!Share to TwitterShare to FacebookShare to Pinterest
Labels: 1977, Ultravox