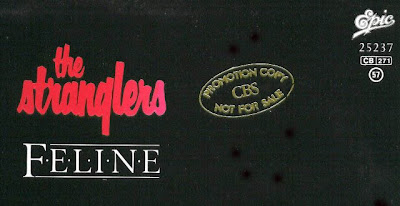 As heralded on the official site (carrying a great piece on the album, here), this month marks the 30th anniversary of the 'Feline' album (or 210 years old in cat years if you prefer). Therefore prepare yourselves for a tranche (good word that!) of Feline related material.

This album, or perhaps more accurately The Collection of 1982 which preceded it, is where my earnest interest in the band started, with 'Feline' following on soon after. Annoyingly, I also remember all too well, a group of mates changing out of school uniform into punk gear before sneaking out of the school back gates in order to make the journey from Lewes to Brighton to see The Stranglers play. This would have been on 17th February 1983. Don't ask me why I did not go, I had been going to gigs for about 14 months by this point and already had a few under my belt. Perhaps I had an exam or something (I was always a conscientious pupil!), but what ever the reason, next day my mates had ringing ears and great stories and I had a ticket stub, a copy of Strangled and a Feline and Rattus badge from the gig..... oh well. 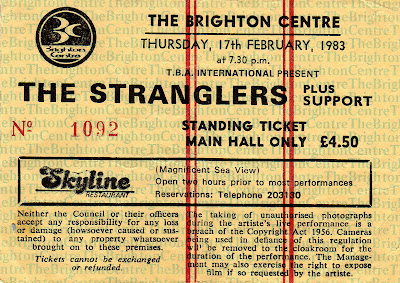 A donated ticket stub.... the full extent of my live Feline experience!

As someone for whom 'Feline' was a starting point (from which I subsequently quickly worked backwards through the back catalogue), the dramatic change in pace and aggression that the album represented didn't provoke in me the kind of reaction that was reflected in the pages of Strangled in the issues that came after its release. In fairness, I think that had I had more experience with the band, 'Feline' may indeed have been an abomination to my ears as well!

I can honestly say that I love 'Feline'. For me it is the last Stranglers album that retains a real menace. That menace, or perhaps it's something more of a brooding (?) drips from the record, even when the material is so melodic. I find that feeling hard to explain, but someone may get it. Anyway, the other things that I like about 'Feline' is that it is brass-free (all of my latter experiences with Mark I featured that brass section, which may have augmented a couple of songs, but did very little for entire sets.... for me at least) and it does not suffer from the horrible overblown production techniques that ruined many an album made in the mid to late '80s.

As an album, it achieves exactly what JJ and the others intended it to. It is so European, even ignoring the lyrical content, to listen to 'Feline' is to be transported to a French village square on a summer evening .... if you really concentrate you can taste the Pastis!

As an album 'Feline' is a triumph, it has aged very well in my opinion (like a fine wine?) and to that I'll raise a glass of Pinot and declare 'Bon anniversaire !', 'Feliz Cumpleaños!' and 'Buon compleanno!'

Email ThisBlogThis!Share to TwitterShare to FacebookShare to Pinterest
Labels: 1983, Feline, The Stranglers