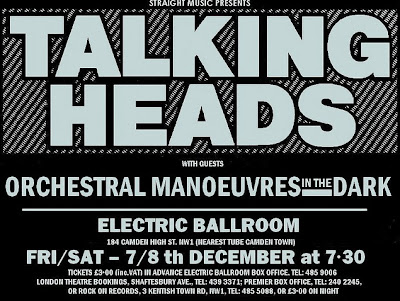 Here's an early set from OMD when they opened for Talking Heads at the Electric Ballroom in Camden.

The material played is taken from the eponymous debut album. At this point in their career, OMD were very much part of the up and coming electronic/experimental clique, that also included the likes of The Human League and Cabaret Voltaire, which in turn came under the broader 'post-punk' umbrella. Their big break had come a few months earlier when they were tour support for Gary Numan on his first nationwide tour (The Touring Principle) in the autumn of 1979. Incidentally, with their respective career fortunes reversed in the early 90's, OMD returned the compliment and had Numan as an opening act in 1993.

All that was someway off yet and Andy McCluskey's uniquely energetic and expressive dance technique (reminiscent of the Jobson School of Dance) had yet to by admired by the public at large!

I saw OMD play in early '83 on their 'Dazzle Ships' tour and I still have a soft spot for their early albums. 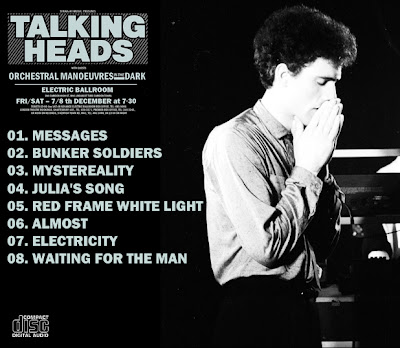 Andy McCluskey has seen video playback after bustin' some moves

Email ThisBlogThis!Share to TwitterShare to FacebookShare to Pinterest
Labels: 1979, OMD, Orchestral Manoeuvres In The Dark