Malcolm Owen of The Ruts Dead at 24

The optimism that accompanied Malcolm's declared determination to kick his heroin habit with the help of family, friends and fellow Ruts was shattered when he was found dead in the bath in his parents home in Hayes on 14th July 1980. 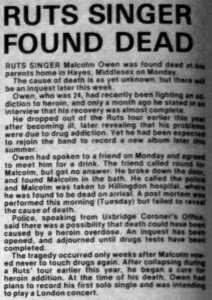 Later Malcolm's story was the subject of an article on the teenage, magazine style television programme '16 Up broadcast in January 1981.

Email ThisBlogThis!Share to TwitterShare to FacebookShare to Pinterest
Labels: 1980, The Ruts