A Fan's Reflection on the Loss of Dave Greenfield 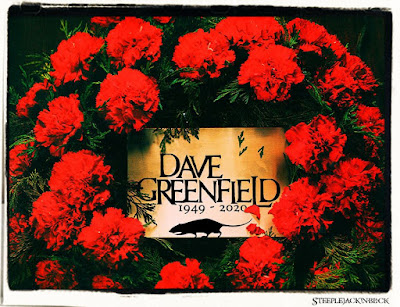 Thanks to Les for the great looking tribute

As I write this on the evening of 15th May it is approaching two weeks since the Stranglers community first learned of the passing of our very own Dave Greenfield. At this time it is a fair bet that many fan's of the band would be primarily concerned with the health and well being of their parents and indeed themselves.... being folk of a certain age. If I am honest, if I had concerns for the band, in my head it was Jet that was the most at risk as an elderly diabetic with a long history of respiratory issues. Dave's own health issues did not even cross my mind. I was not aware that he has a heart condition, the reason for his recent period in hospital, but as a lifelong smoker, I was aware that he suffered from COPD, a high risk condition as far as this dread virus is concerned.

Gunta and I were having a beer on the patio, doing our best to dissect yet another spectacularly uneventful isolation day when our daughter Mo emerged in tears with the unbelievable news that Dave had died. Disbelief was followed by the horrendous confirmation that came from a text from Owen with the just posted text on the official website. I called him and just said 'Fuck!'.

The following days were spent looking out for all of the obituaries and tributes that flooded in from fellow musicians and other notables. Nice words, 'a unique character, 'a true British eccentric',  a musical maverick', 'the sound of The Stranglers'.... blah, blah, blah. That is not to say that the words were not genuine or appreciated as a fan of his talents. It just didn't seem real.

The news moved on quickly. The death toll from COVID-19 is relentless and Dave's time in the media spotlight passed. Indeed for any music fan the coming days just got worse. The death of Florian Schneider (a founding member of Kraftwerk)  was announced two days later (another body blow for this fan!), whilst others have also died recently, Millie Small, Phil May..... Little Richard. 2016 all over again!

I was very happy to be asked to put some graphics together for a Dave Greenfield In Memoriam page for the official sites, featuring images from his first tentative steps onto the pro-musician stage in various Brighton Dance Bands to the last tour with The Stranglers. 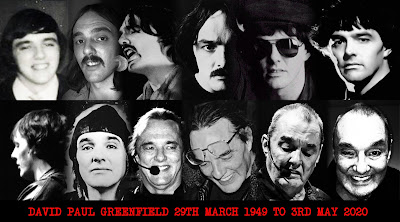 The impact of this horrible disease has been more far reaching that any one can possibly have conceived just a mater of weeks ago! No pubs, no gigs, no holidays and that is just from my perspective, I am lucky enough to be able to work from home so I am in a far better position than many who may visit this site.

The tour, the 'final UK tour' was looking ever more likely to be cancelled and that was terrible in our household..... a light at the end of the tunnel already under threat of being extinguished even in late April! OK worst case, a deferred tour in 2021.

BANG! BBC reports: 'Dave Greenfield: The Stranglers keyboard player dies at 71'. Just another headline on the Corporation's website, but a veritable sledgehammer for 'The Family in Black'.

Now, please at this point do not get me wrong. There are many people far more affected in this event than me, most notably Pam Greenfield, the band and Dave's wider family but I am just sharing some personal thoughts.

I always thought that I was late to the party and it is true, they had already reached the peak of their commercial success (all bar a brief resurgence) by the time I started parting with pocket money for their records. It was late in 1981, at the age of 12, that I bought 'Golden Brown' (along with OMD's 'Architecture & Morality') in W.H. Smiths in Burgess Hill, West Sussex. Taken with that single, I purchased 'Strange Little Girl' and 'European Female', followed by the '77-'82 Greatest Hits album. That album was a revelation in the sense that, despite my tender years, so many of the songs were familiar to me.... from where I do not know, since I was (and still am!) an only child and my parents only listened to Radio 2 in the 1970's. As such I knew 'Mull of Kintyre', 'Carrie Doesn't Live Here Anymore'.... etc etc.and nothing of punk and new wave.

I missed the band on the 'Feline' tour.... waving mates off who had bunked off the last lesson of the school day to go to see the band in Brighton.

Aural Sculpture in Brighton on 4th March 1985 was my live induction.

That was 16 days shy of my 16th birthday. My birthday present was a biker jacket which my parents gave me in advance given the fact that I was going to see The Stranglers. I remember I had no band shirt at the time and instead was wearing one of those  rising sun T shirts that carried Japanese script that you hoped stated something profound but in all probability just said something along the lines of 'I'm A Knob... Please Kick Me!' I got this impression after wearing the shirt in London and being the centre of attention for sniggering, not to mention pointing, Japanese tourists.

As many gigs as I could afford followed. Friendships were formed, many of which endure  to this day, as a collection of fans devoted a significant part of their lives (and income to the band).

And that has become the norm for me since that day in late '81.... nearly 40 years... and I still consider myself to be a late comer compared to many mates.

And this is what I am struggling with.

We came to terms with the idea of ' The Final UK Tour'. Good God, that would be an emotional event, but a chance for an almighty celebration of all that the band mean to us.... and vice versa. We have now lost that opportunity and so if my thoughts account for anything we all feel a bit in limbo. And of course it cannot be helped for fan and band alike!

I am bereft, but it is not me alone, my daughter, Mo (despite my best advice, fell hook, line and sinker for the band), having turned 18 and with that marvelous feeling of parental independence bought tickets for 9 or 10 of the gigs.... leaving me in the shade with just 6! 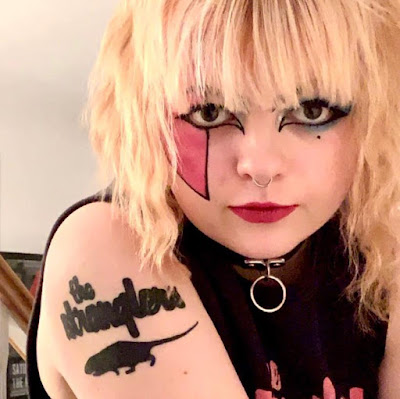 The bit that hits me now like a sledgehammer is that the patterns in our social lives that have in part been lead by the activities of the band have come to an end.

I need not describe the pleasure shared by so many of us of walking into a pub, in whichever town or city the band were appearing, with confidence of encountering a familiar face.

Off the top of my some highlights of the last 39 years include:


Please accept my apologies for spelling mistakes I have been n the house for 10 weeks now and am only functioning on a superficial level.... I have also taken on board alcohol.

Email ThisBlogThis!Share to TwitterShare to FacebookShare to Pinterest
Labels: 2020, The Stranglers