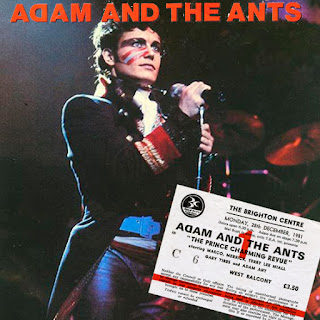 I was three months shy of my 13th birthday when Adam and the Ants came back to Brighton. Actually, I was offered a ticket to see The Police two weeks before, they were currently embarked on their 'Ghost In The Machine' tour. It would have been good, I had most of their singles and I liked them, but my sights were fixed on the Ants in that last week of December. My uncle, at that time a taxi driver in Brighton, sacrificed a few fares in order to queue in line for tickets on the day the box office opened for sale (these were of course the days where you had to go to the venue in advance to get physical tickets!). He was successful and on the evening of 28th December, myself and two school mates excitedly prepared ourselves for our first proper gig.

I well recall the 'Ant Disco' pumped out over the PA to warm the audience up, the choices of the band members..... Roxy Music's 'Pyjamarama' and 'Virginia Plain', along with the Pistol's 'Anarchy in the UK' etc etc. The support act were some manner of dance troupe that were frankly lost on us three, we were only interested in the main event!

This recording of the first night in Brighton on the 28th is not as clear as the Birmingham Odeon recording I posted the other day, but it is a full set recording. That set drew heavily on the 'Kings' album and 'Prince Charming' of course. For some reason, 'Dirk Wears White Sox' was seriously under represented on this tour with the exception of 'Cartrouble'. This was a big disappointment for me, since whilst 'Kings of the Wild Frontier' was, and indeed continues to be, a great album, 'Dirk' for me was the one. As for 'Prince Charming', can anyone really stand up and claim, hand on heart, that it is a great album?

Inclusions and omissions in this set, now looking back at it from a distance of almost 40 years, come as a great surprise. What was the rationale for excluding 'Stand and Deliver' from the set, arguably the best known of the band's hits. All the more baffling when the throwaway pantomime piece 'Ant Rap' was played not once but twice (presumably by virtue of the fact that it was at the time the current latest single from the band, and, unbeknown to most, their last). A.N.T.S. also got in there, a 'Flexipop' magazine freebie of little merit.

Since 1980, Adam had seen fit to put out B-sides of re-recorded songs that harked back to the unsigned early Ants and this represented some of their best material for me. 'Christian D'ior' and 'Physical' were great in that respect but there could have been more for an already discerning and critical 12 year old!

Email ThisBlogThis!Share to TwitterShare to FacebookShare to Pinterest
Labels: 1981, Adam and the Ants