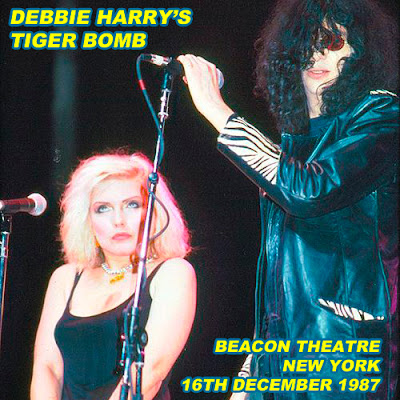 Tiger Bomb as I understand was musical project with the aim of raising money for worthy causes. In 1987, New York was in the grip of the AIDS/HIV crisis and this short gig held at the Beacon Theatre in December 1987 was aimed at fund raising for treatment programmes.

Debbie picked an eclectic set for the evening, opening with The Damned's 'New Rose', before running through 'Danger' from The Selecter, 'Liar Liar', by '69's garage outfit, The Castaways and 'Institutionalised' by Suicidal Tendancies!

Squeezing in a couple of songs by a little known group by the name of Blondie, the set closed with a trio of Ramones' songs with which she was ably assisted by her friend Joey!

Would I liked to have been at that one!

Here's how the New York Times reported on the gig on 19th December 1987:

'Debbie Harry and Chris Stein, the singer and guitarist who were the creative heart of Blondie, have not been seen much since that band's breakup in the early 1980's. Miss Harry made a recent solo album that included a modest songwriting contribution from Mr. Stein, but there were no live performances. The rest of Blondie, which was the most commercially successful band to emerge from New York's late-70's punk-rock subculture, has scattered since the breakup.

Wednesday night at the Beacon Theater, Debbie Harry's Tiger Bomb, with Mr. Stein on guitar, made its debut as part of a benefit concert for the AIDS Treatment Project. There were other impressive performances. William S. Burroughs gave a sharp, wry reading. Philip Glass contributed a piano solo. Laurie Anderson put in an appearance. John Giorno, whose Giorno Poetry Systems organized the benefit, opened the evening declaiming over the tight, urgent snarl of his electric band. But Tiger Bomb was the evening's hit.

Miss Harry paid homage to Blondie's roots in punk rock and in older forms of New York rock-and-roll through her choice of material. She followed ''Liar, Liar,'' a pop-rock oldie, with a song originally recorded by the band Suicidal Tendencies. Blondie's hit, ''Rapture,'' preceded a song by the Fast. Miss Harry sang everything splendidly, her voice sounding rich and full, backed by an intense, storming quartet. Mr. Stein was in terrific form, playing slashing, incisive guitar, while Tommy Price kicked the music along with his drums. At the end of the set, Miss Harry brought out Joey Ramone for some gritty vocal duets.

The performance was a delightful reminder that Miss Harry's absence from performing has been depriving us of a major talent. And the hard, stripped-down sound of the band, which seemed to be the perfect setting for her distinctive vocals, was a reminder that whatever its commercial aspirations and successes, Blondie belonged to the New York punk-rock tradition. One can only hope the performance will prove to be the first of many and that Miss Harry and Mr. Stein will someday make records as raw and energizing as the live sounds of Tiger Bomb.'