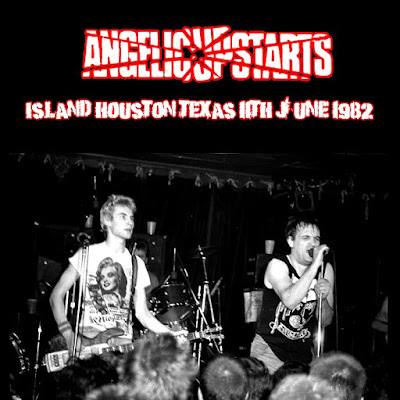 Hey, I wonder what an early '80's Texan audience made of Mensi! Never compromising, always committed, the Upstarts have released some great material over the years. Inspired on seeing The Clash at Newcastle University in 1977, Mensi's passion for the punk spirit took him out of the colliery and into the pages of the music press.

Mensi sets out his and the band's table out here in this early Sounds interview from 1978.

I first saw them late on at the Marquee Club in London's Charing Cross Road in 1989. If the late '70's through to the early '80's represented the pinnacle of far-right violence, for overtly left wing political bands, such as the Upstarts, the threat of trouble carried right through to the end of the decade. At the Marquee that night, Anti-Fascist Action were present, searching punters for weapons and checking for indications of undesirable political affiliations, the reason being that threats had been received that suggested that the gig was going to be smashed up by nazi thugs.

Supporting that night was long-serving ranting poet, Attila the Stockbroker (in addition to Blaggers ITA) who mentioned the '89 gig in his 'Morning Post' column in 2015 as part of a piece on the Marquee Club.

'I did a show with my good mate John Otway there in the early ’80s and remember a tension-filled and storming night in 1989 when I supported Sunderland’s legendary Angelic Upstarts.

The previous year they had been attacked by fascists at a punk festival at the Astoria in London and the gig closed down, with the fascists vowing that the Upstarts would never play London again.

Anti Fascist Action laid down the gauntlet at one of the capital’s most high-profile venues, the fascists didn’t show and the gig was fantastic and a truly memorable night'.

The gig went on for a long time, with Mensi refusing to leave the stage.... I believe that he was having a good time! The Marquee management eventually pulled the plug on the band in order to bring the evening to a close.