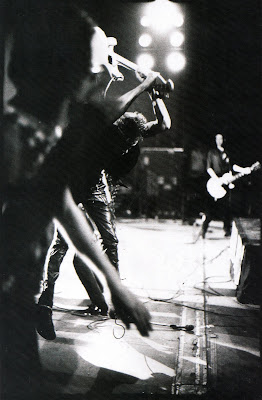 London Clanging!
The frame before the fame
Pennie Smith September 1979

Ok folks, here's one to debate..... and just for the record I don't really know the answer. Two great supporters of this site have passed on to me recordings of the two nights that The Clash played in late September 1979 at The Palladium in New York. One purports to be the rarer recording of the 20th September date.

At the conclusion of 'White Riot' the clang of an instrument possibly hitting the floor two or three times is heard.

Wikipedia backs up the fact that the shot was taken on 20th September.

The other recording is from the following night, 21st September which is claimed from several sources to be the night that Paul Simenon did such a disservice to his Fender Precision bass. If I listen to this version there is a noise again at the end of 'White Riot', but I can hear less violence being done (which may also be due to tape fade).

Several other sources indicate that it was on 21st that Pauly had his tantrum.

Having listened to both recordings my money is on 20th September as being the night of his meltdown (in line with one donors claim and that of Wikipedia). My reasoning being that having seen the bass a couple of weeks ago and being familiar with the robustness of the Precision that level of damage was not achieved in one blow. 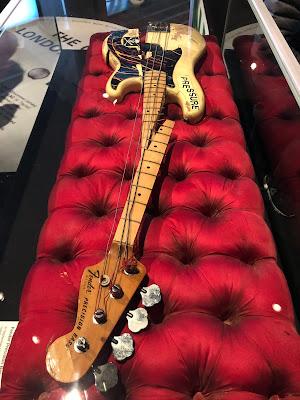 And so I leave it to you, the jury to decide.

Email ThisBlogThis!Share to TwitterShare to FacebookShare to Pinterest
Labels: 1979, London Calling, The Clash