A favourable review of a gig turned around in Wednesday night in Buckinghamshire. 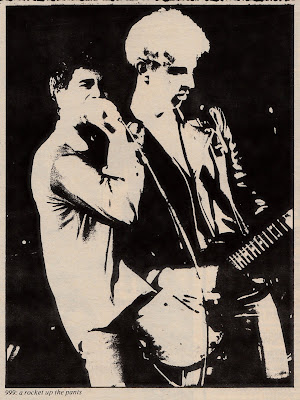 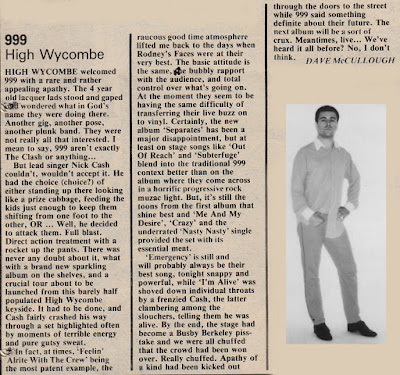 As part of the Separates tour the gig was also reported positively in the local newspaper, the Bucks Free Press Midweek. 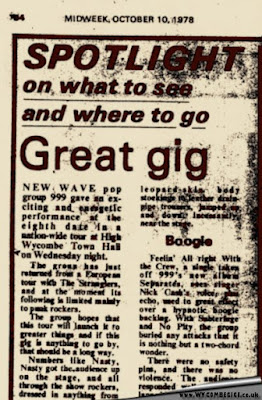 Here's the transcript as the image quality makes the review hard to read. Review 'borrowed' from the http://www.wycombegigs.co.uk/ site.

New wave pop group 999 gave an exciting and energetic performance at the eighth date in a nation-wide tour at High Wycombe Town Hall on Wednesday night.

The group has just returned from a European tour with The Stranglers and at the moments its following is mainly limited to punk rockers.

The group hopes that this tour will launch it to greater things and if this gig is anything to go by, that should be a long way.

Numbers like ‘Nasty, Nasty’ got the audience up on the stage and all through the show, rockers dressed in anything from leopard skin body stockings to leather drain-pipe trousers, jumped up and down, incessantly, near the stage.

‘Feeling Alright With The Crew’, a single taken off 999’s new album ‘Separates’, sees singer Nick Cash’s voice, plus echo, used to great effect over hypnotic boogie backing. With ‘Subterfuge’ and ‘No Pity’, the group buried any attacks that it is nothing but a two-chord wonder.

There was no safety pins and no violence. 999 responded well and the audience lapped it up'. 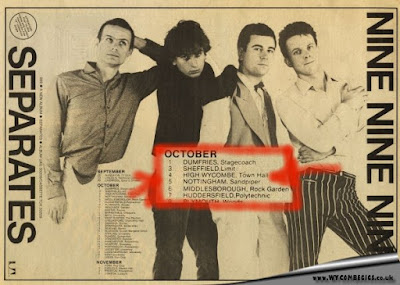 Details of an ealier 999 gig in the town, at the Nag's Head that ended in violence and led to the venue banning  all thinks punk, bands and fans alike, can be found here: