I would have laughed at you for saying as much to me before, but Liverpool, with all its cool, uninspiring streets and grey sky has an aura about it to melt the heart of even the steeliest Sixties abolitionist. Padding along avenues once trod by the Fab Four, on past the Adelphi Theatre on whose steps Bobby Dylan entertained giggling fans in 'Don't Look Back' enchants a soppy Sixties sentimentalist like myself inestimably more than the collected venom of the currently waning beast boom. 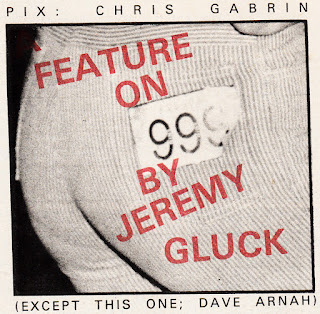 Eagerly sponging up this symthemesc nostalgia of things-gone-by-I'm-too-young-to-remember-first-hand, your reporter winds his lighthearted way towards Eric's, Liverpool's new wave mecca, to observe 999 on one stop of their first headlining tour. Skip around the corner and... what's all this, then? A lonely alley, on one side darkened by continuous clapboards papered with peeling handbills and facing it, Eric's. Decidedly unromantic, right ugly in fact. And after all of it I can't even see what's left of The Cavern! For heaven's sake, you gave four guys medals and then ripped down their shrine!

So what's left? A kitsch neon sign on a facing building that says 'The Cavern', but we know better. The work of some irreverent capitalist, no doubt. No respect at all. My heart welds reluctantly back into a cynic's cold timekeeper and I plod disillusioned into Eric's. 'Face it pal', I tell myself, 'this is the modern world! And so to business.

Orange, dim and amply pillared, Eric's resembles the bandits hideout in a spaghetti western. A wrought-iron enclosure encircles the bar and the low ceiling gives the place the feel of a good-humoured crypt. While I'm perching on a bench creating this scenario, 999 arrive straight off their Volkswagen mini-bus and dive into the jaws of the next one-nighter.

With a tuning fork to guide them, the lads prepare for the soundcheck. Jon Watson observes a particularly menacing ceiling support three inches above his newly skinned head. After a routine assortment of noises, the group retire temporarily to indulge in some ale. I spirit Nick Cash away to the dressing room for an interview.

The first tale from the tour Nick offers involves those lovely Runaways. In Birmingham they have these power cuts, see, and The Runaways figure the only fair thing to do is reverse the bill, go on first, and leave the support in the dark.

"They had this really heavy tour manager, he's a really roughneck, bearded sort and he decided to put them on firs because there was supposed to be a power cut at nine o'clock. There was a high risk period between nine and eleven and he said, 'Oh well, we'll stick The Runaways on first. ' So they went on first and then we went on but there was no power cut so we cleaned up, we got all the encores. We went down a bomb and they were really pissed off, they thought they'd left us stranded in darkness, leaving us in chaos."

Despite unlikely obstacles of this sort, 999 are pleased with the turnout at their shows. A bit thin at first further west, audiences are swelling as they headed towards London and the spectre of the Roundhouse.

"It's going very well. I'm surprised really because we didn't expect to do much business. A lot of people have been coming to see us, especially as we were on the Old Grey Whistle Test. We made a tape at I.T.A. and the producer of the Whistle Test liked it so much he used it. It was an extension actually of the album cover, the stills on the inside sleeve of the L.P. are taken from that show.

The brilliant cover  999 created for their album is the only relief you get now amongst the commercial eyesores lining the escalators of the underground. United Artists, a label unusual in that it has nursed its new wave signings with genuine care, trust 999 to do the right thing. 999 are part of the new wave turn to accentuate the creative and make a statement in a subtier manner than blatant effrontery. The whole idea emerges as admirable when steered properly between the temptations of comic relief and dangerous visions. Let's face it, the hard edge of the new wave is cutting a divergent path to the one that seemed obvious a year ago. Nick explains the philosophy behind the cover's concept.

"With the piano shot we thought we'd like something that would go against the grain a bit. Other people would sit at it with nice lighting and that's why we chose to lay in it and get our feet all over it. We completed two covers and finally chose the piano one.”

"It's nice to have an art thing as well, there's no reason why you can't have it both ways, every record is in a cover so you may as well use it to your best advantage. We had the reception for our album at an art gallery and instead of having people throw cake at each other we showed paintings."

The new wave continues to unravel according to prods from the media. This is bound to affect a group beyond merely defining the trends they exist in or out of.

"One or two things I resented in the press. When we played in Amsterdam there was a few Hells Angels there who were causing trouble,  it wasn't our fault but one of the headlines was 'Dial 999 for Aggro'. The local council who booked us later said we don't want this band here again. I don't mind direct criticism but when  the band loses money and a job because of it, then I do ."

Idealism seems to have disappeared entirely. The economics of a viable group are the overriding career guide now. The practical attitude of 999 may not be defiant but it's the only way-to be in the long run.

"In terms of just keeping going as a band you have to be successful, you've got to sell records and do big tours. I think that a lot of groups get in a dilemma about success, trying to justify it."

The interview concludes when Nick is called for the soundcheck, renditions of 'Chicane Destination' and 'Titanic Reaction ‘. Flattened somewhat by Eric's layout, the sound is nevertheless compelling. Nick dodges the microphone to save his voice extra strain until he can see a doctor back in London. Simulating collisions with the Jon's diabolically rumbling laugh rolls out between numbers. Finally all is ready and we scamper put through light drizzle to a nearby Italian eatery.

Back at Eric's meanwhile, a sizeable complement of kids has already arrived. Two girls who have been following 999 for three days already converse with the band as old friends. The group shells out badges and stickers to the dedicated at the rear of the van. The scene is not unlike a late night Salvation Army handout. Touring on a strict budget scales it all down, alright. Come on, come all, and get a free badge.

The further whims of fashion are unveiled inside the club. A dozen people sport berets as their expression of clan. Next to them are a drove of souls inspired by power pop to dress like swinging accountants, in sweaters, ties and shiny shoes. Pogoing is clearly losing favour, a mutated pop sensibility has overtaken the frantic gyrations of a year ago, the whole attitude has become more considered. Outrage has lost its innocence and left a residue of self-conscious vogue. Something's happeried and I know what it is but I'm not too crazy about it.

Tonight The Hot Rods and The Motors are also in town so the crowd expected has been scaled down accordingly. There's less than a crush when the support group Turntricks takes the stage. Turntricks are a beneficiary of Eric's monthly Decca audition; once a month a band is chosen to record a demo for Decca. Playing a lightweight set similar to the Talking Heads, Turntricks' songs are tested severely by a lack of variety. A studio might sort some of this problem, the potential is there to cultivate.

999 grab the spotlight at ten-thirty. There is a crush at the front, then a very tangible gap and then the rest of the audience totally impassive.

The last time I'd seen 999 was in July when they supported The Saints at The Nashville. I'd formed no real idea of their show so this gig would be my sole guide.

999, in their unique clothing, are definitely apart from their contemporaries. The appearance is as elusively styled, as is their music. Sometimes 999 can be positively menacing, with Nick capering around the stage like a mad preacher giving a sermon, pointing and shouting. Guy Days peals off barbed, acute solos, lunging into the front rows which pulsates like a globe of jelly penned in by the others standing indecisively still behind them. Alternately staccato and fluid, 999 are often unpredictable and always singular.

Speaking in the dressing room after the encore, Nick and his cohorts are uniformly unexcited with their performance. Lined up against previous nights it's just average. One fan from 999's original Southall contingent who went to the trouble of burglarising a house to raise the money for his trip to Liverpool merely insults them with familiar impunity. 999 don't expect flowers for this one and that's the reality of a tour - you can't hit the bullseye each time out.

I thought it was alright. Shamefully unacquainted with 999's music, I was more than willing to hear it after the gig. It isn't as continuous and singleminded as much new wave music and takes that extra to communicate to a crowd. It isn't overtly physical, there's a mental element too that has to come with time. A lot of people are going to take that time, there's no doubting that. The next tour should have
both end and all points inbetween burning.

Pablo Labritain, not fatigued in the least, begins a vigorous spraypaint job in the dressing room, asphyxsiating the rest of us simultaneously. There's a bit of a rush to get back to London en route to the south coast and once Guy and Jon have returned from a liaison with the fans
we pack it in.

The police, are loitering outside, seemingly more curious than anything else. Guy is exuberantly threatening the van with a brick while one of the-road crew climbs on the roof. The police make another, more interested pass. Guy is coaxed inside the van. We skid out into the street. The proverbial one night stand is over.