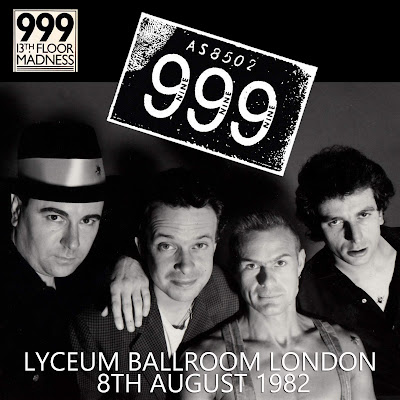 I was very happy to stumble over this one recently as I have not seen many 999 bootlegs post 1981. This one is especially interest as not only is it of excellent quality, but the set is very adventurous. The '13th Floor Madness' album was on the horizon. Indeed, 'Arabesque' and 'Custer's Last Stand' feature, but also 'Obsessed' and 'Wild Sun', along with the song 'Blaze of Noon' which to the best of my knowledge has only ever appeared on the 1984 'Identity Parade' compilation album. The last four songs mentioned had a loose Wild West theme running through them..... missing is the single 'Indian Reservation'!.

It is noteworthy to say that whilst in the studio 999 were about to make a big departure in sound, on stage they knew what their audiences wanted, then as now.

Email ThisBlogThis!Share to TwitterShare to FacebookShare to Pinterest
Labels: 1982, 999