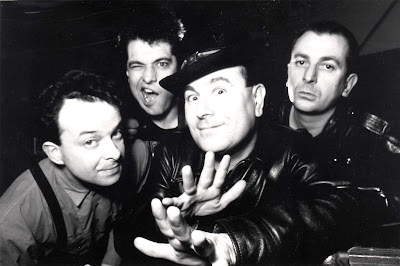 A: Since forming on Late ’76, the line-up has been fairly stable except for a period in 1978 when Ed Case stood in for you. What happened?
N: Show ‘em Pablo.
P: I had an accident coming back from Sweden. This bone was very badly smashed, the elbow was up here somewhere. Taken to hospital, they set it and trapped the nerve in the set….. I was paralysed for a year. Came back, next gig was at the Waterloo pub.
A: Wellington.
P: Yeah. Anyway, that’s what happened, it’s one of those things, a trapped nerve. At one time they (the band) thought I wasn’t coming back.
A: Yeah, ‘cos I read this thing again about paralysis.
P: Well it was to an extent.
A:  Does it still have any affect now?
P: What playing?
A: Yeah.
N: Do you get any pain Pablo?
P: No, not pain. It’s a bit weak, it’s week. With paralysis all your muscles, but I had electrical treatment for that. It’s alright now though.
N: That’s the only reason he wasn’t in it though.
A: Ed Case did some of the tracks on ‘The Biggest Prize in Sort’ didn’t he?
N: Yeah, that’s right. I can’t remember which ones he did. I don’t think even he could!
A: Some of the people that read ‘Strangled’ aren’t gonna know who 999 are, some will some won’t, but….
N: Quite a lot of them will.
A: Yeah sure. For some though, the first encounter with 999 would be from footage Vienna (that was included as an extra on the S.I.S. released ‘Battersea Power’ video), that sees you legging it around the airport.  How did  that come about?
N: Well what happened was that we were playing a gig in Vienna with The Stranglers, one of those classical auditoriums. Anyway, there was something wrong with the electricity and the manager of The Stranglers said that we couldn’t play because there wasn’t enough power for the lights and the PA. But, we said that we wanted to play because we’re advertised to play and there’s a few people who wanna come and see us. But they said you can’t play, so we said we won’t use any lights and a very small part of the PA….. we can’t possibly blow it up! They said, you can’t play, end of story, So when the concert finished I felt very upset because some people had come to see us, yeah, a lot more people had come to see The Stranglers, but a few people had come to see us. So, out in the foyer, as the people were coming out, I decided to play to people. I just had a small amplifier and I played and got a very good reception from it y’know and they filmed it and it was on TV and the TV Company were very interested in this phenomenon, which is more like playing a punk rock gig than a normal concert, do you know what I mean? And so I decided to do it all over Austria, y’know.  I just felt like doing it, it had such a good result and it’s a good way of promoting a record. 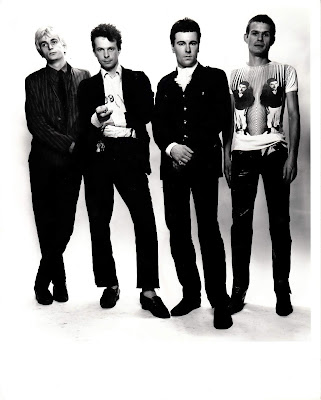 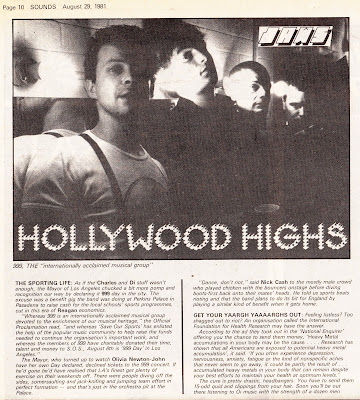 N: Yeah, me personally by the LA Times, because the kids came down to our concert and they used to slam dance and jump off the stage and stuff. Here they used to pogo and that’s what they used to do over there, but I never saw anyone badly hurt. To all the people we played to, I think that a couple of people got a few loose teeth , no more. But specifically, they said that two of the kids who were at the concert went out three weeks after we were there and stabbed a chauffer and stole his money on Sunset Strip ad as they were 999 fans it came back on us. Anyway, back here it got onto the front page of The Sun, ‘999 Slam War’ and ‘Punks Murder on Streets’, so The Sun decided to do an interview with us and we did it in Soho Square and all this is true and they said you’re really violent and people will kill in your name and we replied, we just play music, come down and see us and you decide. They said, well can’t you be sick for us or go and beat up that old lady over there. The Sun will make the news and invent the story around it to sell their paper. I wrote to the LA Times and told them that we were anti-violence and anti-racist and they had no right to censor us because this is what the kids want. In fact, 999 were slagged off for everything and yet we played some concerts over there and raised money because we saw how bad things were in downtown LA and donated money, not a massive amount bearing in mind that we were just a poor English band, but enough to open gymnasiums during the long school holidays, so that the kids could go down there and listen to a bit of music and do some sport and that went unnoticed. But, the Mayor of Los Angeles, Tom Bradley, heard about this small English band who did this and he declared a ‘999 Day’, seriously, and we’re now members of the City of LA and there’s a plaque on my wall to that effect. 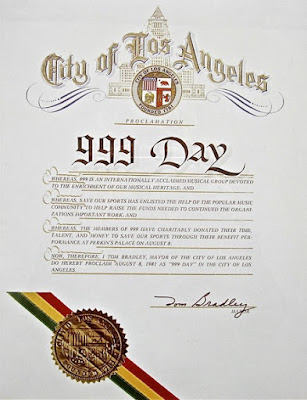 G: You mention that 999 have an anti-racist stance, do you think that you yourselves and other bands should get together and make some kind of stand. We’ve noticed increasing numbers of neo-nazis turning up to see punk bands and causing trouble .
N: Controlling your audience is sometimes a difficult thing, but we always stop playing if we see a fight, he culprits and say ‘We’re here for the music!’ To which everyone says ‘Yeah!!’ making them look like arseholes! Also we would have those people thrown out. Luckily, the technique of singling out trouble makers for verbal abuse to make them feel small has always worked for us and since the music is anti-violence and anti-racist our gigs don’t get used as platforms for these people. Generally, we have a great empathy with our audiences where ever we go and trouble isn’t an issue.

Email ThisBlogThis!Share to TwitterShare to FacebookShare to Pinterest
Labels: 1993, 999