All thinks considered, 1978 was a positive year for 999. Their singles got generally positive reviews as did the first album, '999', even if the reaction to the second, 'Separates' was mixed. On stage, 1978 saw 999 consolidate their reputation as a high energy popular draw - the toured Europe with The Stranglers and undertook their first headline tour.

It would have been great to close the year positively, but it wasn't to be as drummer, Pablo, was to be seriously hurt in a Sweden. Such were the injuries to his arm that it was touch and go whether the would be able to continue to play at all. However, fortunately with intensive physiotherapy, he was in a position to retake his place on the drum stool some 12 months or so later, relieving stand in Ed Case of his duties.

A final stroke of bad luck in this sequence of events was that due to an industrial dispute, the technicians responsible for the airing of Top of The Pops went on strike and a planned appearance of the band to promote the single 'Homicide', which entered the UK Singles Chart at Number 40 (the lowest chart placing that would get a band onto the show) on 19th November. As it was other issues came into play as the BBC were not at all happy with the lyrical content of the song (see a 1992 interview that I did with the band (to be posted this week) in which Nick elaborates further).

At the time, an appearance on Top of The Pops was a big deal, as phoney as it was, as it would invariably give a single a boost that no other form of exposure could achieve, such was the reach of the program to it's record buying teenage audience. 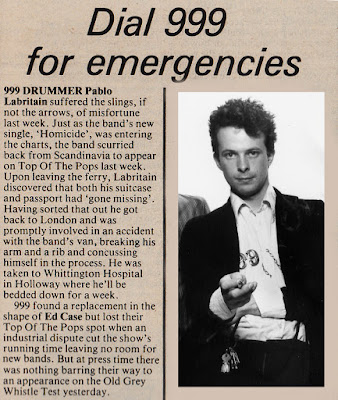