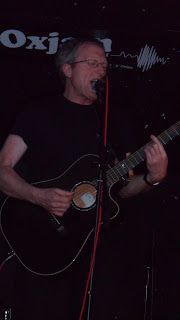 
Last Saturday's Oxjam gig (a nationwide fund raising event for the Oxfam charity) was ideal for me. A gig in the back room of a pub within walking distance from home. This was the room that was the venue for both Gunta's 30th birthday and Rudi's christening many years ago.

As I mentioned in a previous post this was our local until we moved to the other side of the town (at the time it was run by a lovely couple, James and Helen - James it transpired after we had known each other for a couple of years was sometime stand in bass player for the Adicts). Since moving the frequency of our visits to this particular watering hole have diminished somewhat, so it was really great to catch up with a couple of people who we haven't seen for some time. And so it was that by the time I ventured into the back room for the gig I was a bit Wibbly Pig!

I spoke briefly to Steve before he was due to take to the stage. His set this time around was much more Neurotics orientated that on the previous times that I have seen him play solo (albeit some years ago). Two of these songs I recorded.

The set closed with a rousing rendition of 'Kick Out The Tories'. Well at least it was rousing in my head. Gunta informed me that I was 'helping' Steve with the vocals from the front of the stage... how kind of me.... such a socialist act!
Posted by Musky03 at 23:28