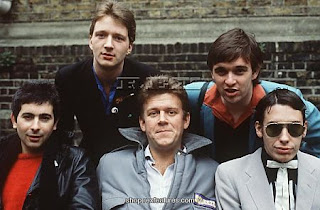 
Here's another band that were highly active in 1980 that offered up songs of such quality that, 30 plus years on they still sound remarkable. Again, a contemporary off-shoot of punk rather than a punk band per se Squeeze's strength I think lay in the near perfect songwriting abilities if Glen Tilbrook and Chris Difford. As the age old advice goes, 'write about what you know' and you get the feeling that some of the material at least could be autobiographical of the band's life down in South London.

I only saw Squeeze once in 1989 (on the 'Frank' tour) and surprisingly I came away disappointed. It wasn't that the band played badly, rather they committed the cardinal sin, in my eyes at least, of playing a medley of hits. This happened quite a lot in the '80's (I also recall Motorhead doing it as well), but such practises should be consigned to the dustbin of time...... Stars on 45 and Jive Bunny... no more needs to be said.

I have tickets to see a reformed Squeeze in Cambridge next month so I will report back.

FLAC: On its way!

In town on this night:

Email ThisBlogThis!Share to TwitterShare to FacebookShare to Pinterest
Labels: 1980, Squeeze