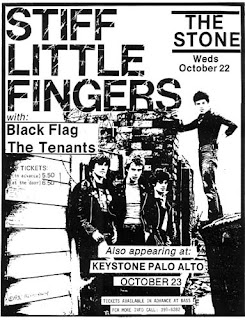 Stiff Little Fingers were very much in the ascendancy when they played dates in the US in 1980. With two classic punk albums under their studded belts they were on top of their game and ready to broaden their musical horizons.

Having been advised and encouraged by mentor and manager Gordon Ogilvie to commit to record their experiences as young disaffected punks trying to do what teenagers do, but in the midst of the devastating 'Troubles' that were in full flow at the time, the seminal 'Inflammable Material' and 'Nobody's Heroes' albums set out the band's stall.

From the third album 'Go For It', the political message was toned down and a different, yet still potent sound came to the fore. I recommend all of their albums!

Northern Ireland produced some of the best music of the late '70s/early '80s with the likes of SLF, Rudi and The Undertones, in spite of and perhaps as a result of the extraordinary experiences these bands had... the kind of stuff that most of us only ever saw on the 9 o'clock news.

FLAC: On its way!

Live in the UK this night: