Ruts DC Gig At Islington Assembly Hall Cancelled - Someone Up There Hates Me!

I was gutted to learn that next week's scheduled gig at the Islington Assembly Hall has gone south. Given that I had tickets to see them in Harlow, was planning to see them in Birmingham, as the appearance at the London Punk Festival wasn't happening, only to change plans on the confirmation of the Islington gig.... I am now officially feeling jinxed. First it was Kevin Rowland and now it seems that the Mayor of Islington has come in on the plot!! 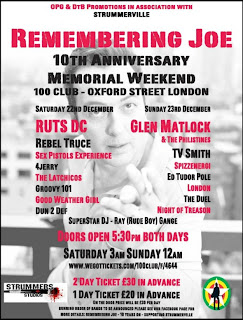 This is what I am missing. One for Malcom.