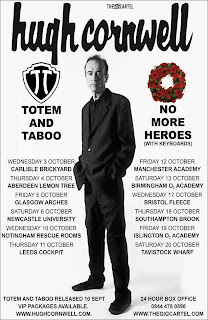 Right, I'll be honest upfront here, it was purely the 'No More Heroes' set that enticed me to this gig. Good luck to Hugh with the new material, but his Jimi Hendrix/Arthur Lee tinged brand of rock is not my thing really. When I heard that bass and keyboards would be interchanged for the 'Heroes' set I was concerned....

The venue on this very damp Friday evening was pretty full, a good turn out for the old boy. For the reasons given above, I won't dwell on the 'Totem and Taboo' set but move on to what I believe a sizable proportion of the crowd were there for.

There were several elements that made this material stand out in worthy contrast to how The Stranglers now play this material. Hugh's vocal was in the main pretty good throughout this set, although I do struggle with the reversal from the original when it comes to the vocal duties... but hey if JJ's not there!? On that point, Steve's vocal on 'Something Better Change' didn't really work for me, but the bar was set high.

What was consistently good, to my ears at least, was the guitar. Hugh was spot on I think for the majority of the set and his guitar parts were true to the original (which is very important for me). As for the keyboard bass, that wasn't such an issue in the end, it was there and it worked as intended. I would like to be able to say the same thing for the keyboards. I wasn't expecting a glorious hammond swirl, but neither was I anticipating gameshow keyboards. So I apologise Hugh, but that element of the show needs some work (I think that comment may qualify me to be in the ranks of the 'Stranglers Police'), but it was my only real beef with this set.

The highlight for me was undoubtedly 'English Towns', a track often consigned to be filler on the album, but I can't agree, for me i has always been one of the best tracks on the album. So, to hear it last night in this context was a real treat (and a rare treat indeed, the only documented Mark I live version being from a 1977 soundcheck in Liverpool).

A second highlight was 'Strange Little Girl', my appreciation of which is documented elsewhere on this site. If ever was a song that belongs to Hugh's vocal this is it. Absolutely fantastic to hear him do it.

So Hugh, I think that you pulled it off quite admirably. 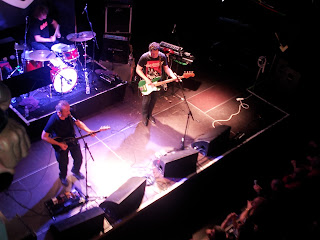 Should anyone have any recordings from this tour that they are happy to share please get in touch as I would love to hear the set again without the influence of the white wine/kronenburg cocktails that I was drinking! 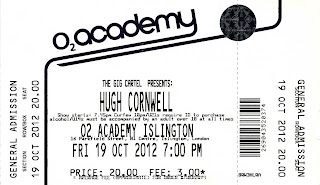