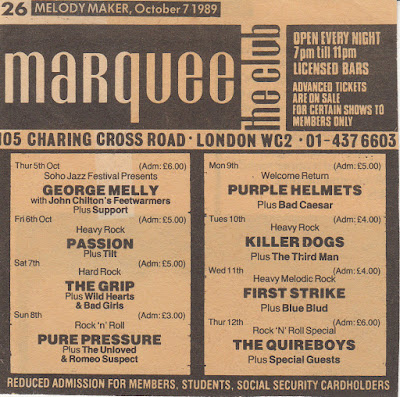 This was one of the last, if not the last full gig played by The Purple Helmets .

As mentioned earlier, in the 16 months since their previous engagement at the Marquee, the club had moved a few hundred meters to a new location. Details of this gig are very sketchy in my mind, although looking back on photos of friends at the event it can be guaranteed that at least an hour or two had been endured pre-gig in The Tottenham.

Two things have stayed in my mind from this gig. Gunta and I (now an item since shortly after the first Marquee gig) were in the foyer, close to the doors onto the street, when Dave sauntered in clutching his bag of mysteries. Greetings were exchanged before a rather inebriated Gunta suggested that The Helmets could play in her Ealing bedsit. Dave, then spent the next five minutes explaining in Greenfield-esque detail, the logistical and technical reasons why this wouldn’t be possible!

The only other recollection I have if of my introducing Gunta to JJ. They shook hands as JJ waited expecting her to say something, but alas no words were forthcoming! Such was the extent of his gallic charm over her at the time!

And that was it for me. The Purple Helmets were a brief musical deviation for band and fans alike. The intimacy of those few gigs offered many of us a chance to interact with the band in a way that had not been possible for a long time, which was great. Perhaps more importantly for me, at this time enduring friendships (not to mention a marriage!) were formed which are reinforced periodically in the pubs of London (happily not The Tottenham)! 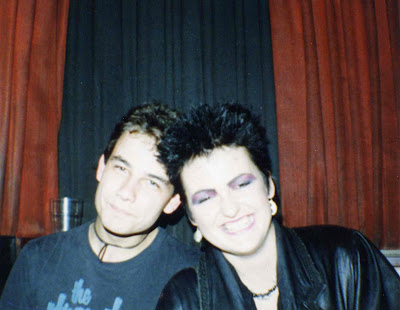 Gunta and I at The Marquee (Charing Cross Road) 9th October 1989.

I have another couple of photos from that second gig that feature the nucleus of my Stranglers atom at the time. The whereabouts of some I am aware of, others not. 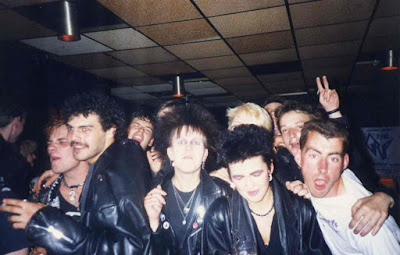 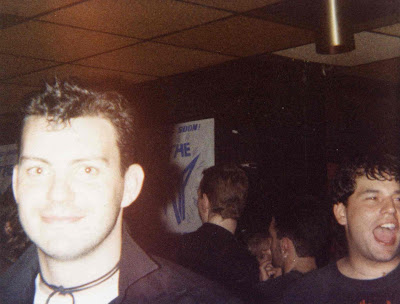