This is a gem of a recording, short but with a great pedigree. Filmed as part of the BBC’s ‘Rock Goes To College’ series, which unsurprisingly featured name UK bands playing various UK academic institutions, it was in their home town of Guildford that the Stranglers committed TV suicide and crossed swords with the British Broadcasting Corporation.

Seriously pissed off that their request that 50% of the ticket allocation be made available for non-students had not been honoured, the band laid into their predominantly student audience with relish. The gig culminated after Hanging Around with the Hugh Cornwell line ‘Guilford University never represented Guildford. We hate playing to elitist audiences, so fuck off.’

A censored clip of ‘Hanging Around’ later featured on the BBC’s ‘Sounds of the 70’s’ series, whilst more recently, footage of ‘Ugly’ has surfaced on YouTube. I hope it is not long before the full version of this short gig makes it into general circulation as it really does capture the band at their punk height.

In the wake of the aborted TV gig, the music press were quick to pillory the band in print as exampled in this article from the 21st October issue of UK music weekly Sounds: 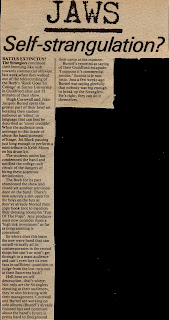