Generally my plan is to post gigs that have not often appeared on the web. This one has, but I make no excuses since this was my first live experience of The Stranglers. I have several versions of this recording, but this, the best, comes courtesy of Dom Pilgrim (cheers!).

The gig was 16 days prior to my 16th birthday. In recognition of what this evening meant to me, my parents presented me with my present early, a black biker jacket. Suitably attired and wearing roughly the same quantity of eyeliner that JJ has on Rattus, me and a mate took the short train journey from Burgess Hill to Brighton.

The Gods must have been looking down favourably upon us on this evening as once in the venue I was able to get a couple of pints (not always possible as I was so small!). The support was abysmal, puppets have never been my thing. But then Vladimir and the Beast came over the PA and we were up and running... Something Better Change, Nuclear Device, Toiler, Sleazy, this was the life! At one point someone threw a shoe at Burnel which was returned with some force. Intro to Peaches cocked up to much jeering, again provoking a response from the bass player. I felt that at this time, whilst ultimately very professional, the band had a much easier rapport with the audience than in the years that followed when they became a lot more polished and less engaged with the crowd. 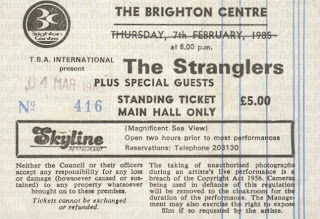