Early 1987 saw a second leg of last autumn’s Dreamtour, including three excellent nights at the Hammersmith Odeon (two of which were recorded and will in time find there way onto this blog).

But it was the band’s appearance at the 1987 Reading Festival that was perhaps the live highlight of the year. The Reading Festival had for years been primarily a ‘metal’ festival, which accounts for Hugh’s introduction to ‘Golden Brown’. However, the festival was in transition at this point, in the early ‘90s it could be considered to be more of an indie festival.

The Stranglers played a great set ahead of the appearance of Alice Cooper (Cooper’s drum soundcheck on the adjacent stage, part way through the Stranglers’ set, caused some needle on the day. It is worth noting that this was the first airing of another cover, this time the Kinks ‘All Day and All of the Night’ which was to be the band’s next single. Without doubt ADAAOTN is a great song, but one I would like to see dropped from the set….. in favour of La Folie perhaps!

It was at this gig that I met one Steve Tyas. Later after placing an add in Strangled we got back in touch and I am pleased to say that we are still in touch and perhaps more importantly still seeing the Stranglers 24 years later! 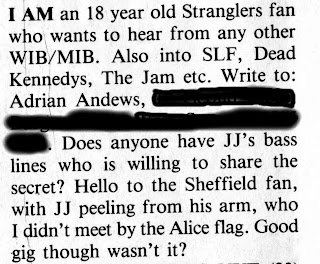 So, here are two edits of the gig. The first is the full set, the second a 1 hour BBC Radio 1 ‘In Concert’ broadcast. The last song on the radio broadcast version, ‘Toiler on the Sea’ was also broadcast by the BBC, same gig but with this song added in place of another. 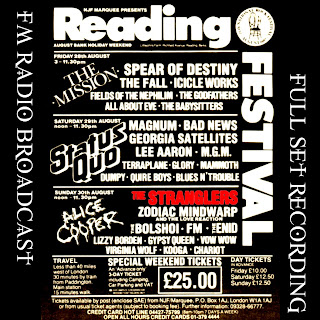